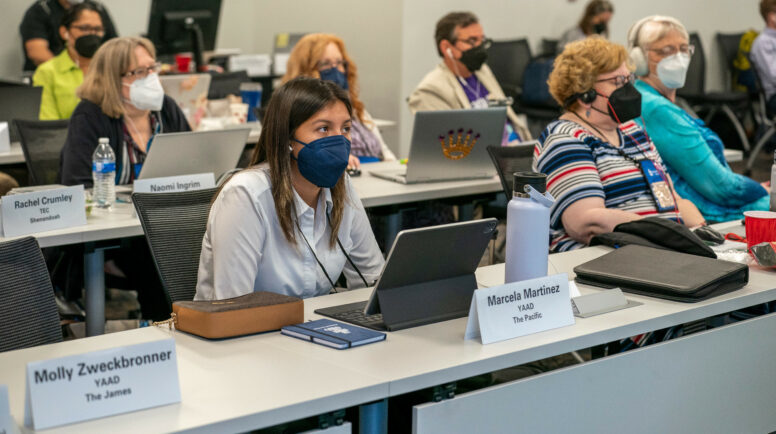 With no debate and no amendments, the assembly voted 340-41 to approve ENV-10, following the recommendation from the Committee on Mission Responsibility Through Investment (MRTI) to divest from the five firms.

That decisive vote reflects this assembly’s endorsement of MRTI’s strategy of corporate engagement and selective divestment, and the recognition that that approach has repeatedly been affirmed by previous General Assemblies and has the support of the Board of Pensions and the Presbyterian Foundation, the investing agencies of the denomination.

What this strong vote doesn’t reflect, however, is how angry some Presbyterians are about what they see as a PC(USA) response they consider to be too slow, too cautious and not brave enough in a world that’s literally on fire.

The assembly took a series of close votes July 6 on proposed amendments related to ENV-09, which became sort of a catch-all item of business the Environmental Justice committee reshaped and used to respond to several recommendations, affirming MRTI’s strategy of corporate engagement and calling for a series of other actions. As amendments were proposed, Young Adult Advisory Delegates (YAADs) voted overwhelmingly for changes that commissioners narrowly defeated.

Some commissioners and YAADs argued they feel so strongly about the need for change because they see the destructive impact of global warming all around them in the communities where they live.

One was an amendment proposed by Gusti Linnea Newquist, a minister from Shenandoah Presbytery – a coal mining area – asking for a re-evaluation of the 1984 policy that guides MRTI’s divestment strategy. On a key vote regarding the amendment, YAADs (who only have an advisory vote in plenary sessions) voted 17-7 in favor. But commissioners turned it down by an extremely close vote of 180-183.

Newquist told the assembly her West Virginia congregation is committed to working for environmental justice, and that she supports the work of MRTI and selective, phased divestment. “However, we are concerned that the policy guiding that divestment strategy is based on an outdated, 40-year-old theological and ethical context. This is 2022” — in the decade that scientists say “will make or break our climate,” Newquist said. “We are out of time. Even those of us in coal-producing West Virginia know that.”

Kerri Allen, a minister from Illinois who is chair of the MRTI committee, responded by saying, “the theology is very solid” in the 1984 policy. “The context has evolved,” but as Reformed Christians “what our theology says is that we use our power and our privilege to try to impact change,” Allen said. “So divestment is a means to an end. It is the tool that we use of last resort. It is not an end in and of itself.”

Ginna Bairby, a minister from Taos, New Mexico, proposed another amendment to ENV-09 that would have commended MRTI for its work but also asked the assembly to “call on all financial investments of the PC(USA) to be withdrawn from industries that contribute to the production of the two major greenhouse gases (CO2 and methane),” using, in part, the company list entitled The Carbon Underground 200.

Basically, the amendment called for more aggressive divestment — for the PC(USA) to act more comprehensively in divesting from fossil fuels, and to do it now.

“I believe that God is calling the church to be bold and faithful,” Bairby told the assembly.

Bairby said two months ago, “our little corner of the world made national news,” as fires fueled by drought and winds swept through the area. Small churches had to evacuate and cancel worship. Church members lost homes, livestock and property. Some moved to shelters, where they caught COVID-19. “This is the trajectory we are on,” with floods, tornadoes, droughts, and crop shortages.

“We have spent over four decades saying we should act,” said Molly Zweckbronner, a 20-year-old YAAD from the Presbytery of the James. “This church I’m proud to be a part of is contributing” to the fear of planet destruction she has felt all her life.

Daniel Herron, a YAAD from Olympia Presbytery, said he voted against categorial divestment as a YAAD in 2018 — but said it’s a vote he now regrets. In September 2020, he saw the mountains of Washington state covered in a blanket of toxic smoke, caused by forest fires. “It was choking anyone who was not indoors,” Herron said. “Every summer, the land burns. Our churches burn. Our homes burn.” As a Matthew 25 denomination, he said, “We must take drastic action” to stop the climate change that is hurting the world’s most vulnerable citizens the most.

But those passionate arguments ran up against a wall of policy.

Rob Fohr, the PC(USA)’s director of faith-based investing and corporate engagement, said the language of calling on the PC(USA) to categorically divest is “aspirational language” that can’t actually be achieved. Because of the action of previous assemblies, selective divestment “is the policy of the Presbyterian Church (U.S.A.), and it is the only way that divestment recommendations can be implemented,” using the seven criteria in the 1984 policy.

So the assembly could approve the “conditional, aspirational language” proposed in the amendment, “but it will not result in divestment implementation,” Fohr said.

YAADs voted 21-4 to approve the proposed amendment calling for categorical divestment. But commissioners voted it down, 186-197.

Before the vote, Frank Spencer, president of the Board of Pensions, argued the strategy of corporate pressure followed by Climate Action 100+, a coalition of which the PC(USA) is a member, has been effective in pressuring energy companies for change and working to achieve the goals of the Paris Agreement for slowing climate change.

Before the vote, assembly co-Moderator Ruth Santana-Grace asked the assembly to pause for a deep breath, and then for prayer. “We confess that we have taken for granted this sacred space you have given us,” she prayed. The decision made “will never be enough for some, it will be too much for others.” Santana-Grace prayed commissioners would honor one another, “bound by the movement we make, even in disappointment and in hope.”

Carbon offset fund. The assembly also approved ENV-04, a carbon offset program that provides a way for Presbyterians to donate to a fund to offset the carbon impact of work-related air travel by Presbyterian Mission Agency (PMA) employees. The action encourages PMA staff members to limit travel when they can use teleconferencing instead, and to contribute carbon offset funds from the PMA travel budget for trips they do make — most likely ranging from $5 to $20 per trip.

The action also allows Presbyterians to donate to the carbon-offset fund to offset their own travel, with collected funds used to make grants for tree planting and other greenhouse gas sequestration projects. The assembly amended the item to direct all PC(USA) event sponsors to offer an opportunity for attendees to make carbon offset donations for their travel.

Investing in a green future. The assembly voted to approve, with comment, ENV-02, authorizing the study and recommendations from an Advisory Committee on Social Witness Policy paper called “Investing in a Green Future: A Vision for a Renewed Creation,” on environmental justice and environmental racism. The assembly voted 214-143 to amend one section to restore language regarding stopping fracking and halting the construction of fossil fuel pipelines that the committee had rewritten.

The committee’s language spoke to the importance of proper maintenance of pipelines — but left the door open to fracking and building new hydrocarbon pipelines.

An irony: the commissioner who argued the strongest for that revised language in committee – Ed Yokley, a ruling elder from Foothills Presbytery with a 40-year career in the chemical and materials industry – could not speak to the issue in plenary. Another commissioner who’d been in contact with him said a summer storm had swept through and knocked out Yokley’s power.