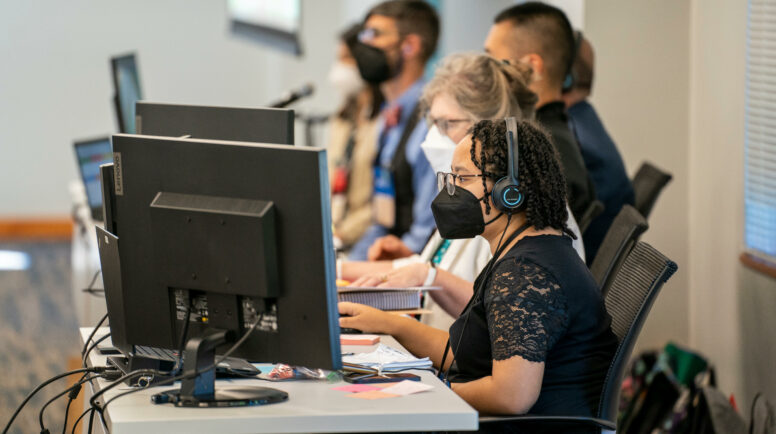 The Environmental Justice Committee at the Presbyterian General Assembly 225 (2022) in Louisville, Kentucky. Photo by Gregg Brekke for Presbyterian Outlook.

Louisville, Kentucky – The Environmental Justice Committee of the 2022 General Assembly voted on June 25 to adopt what one commissioner described as a “consensus overture,” combining elements from a handful of overtures regarding global warming and environmental degradation, attempting both to unify the church and convey a sense of urgency about the dangers facing the planet.

The committee voted 32-3 to approve an amended version of ENV-09, including these elements.

It affirms the approach that the Committee on Mission Responsibility Through Investment (MRTI) is taking to pursue selective divestment by the Presbyterian Church (U.S.A.) from particular energy companies with whom corporate engagement has not been fruitful, and which have not made sufficient progress in addressing global warming according to the metrics MRTI uses for measuring change.

It did not take the action recommended in ENV-07 — calling on the PC(USA) to divest fully from the fossil fuel industry. More than two dozen presbyteries concurred with that overture — but repeatedly, General Assemblies have voted not to divest categorically (if that’s even possible for the denomination to do), and instead to support MRTI’s process of corporate engagement and selective divestment.

Among its recommendations in ENV-09, the committee is asking the assembly to:

Naomi Ingrim, a minister from Mission Presbytery in Texas, said her hope is that the efforts to provide presbyteries and pastors with resources to support congregants who work in the fossil fuel industry and interpret MRTI’s work might keep people from making “quick judgments” in anger when they hear the word divestment — avoiding potentially serious divisions in congregations.

In its discussions, the committee also acknowledged that some will think this action doesn’t go far enough — particularly those who favor categorical divestment. The recommendation likely will “get some resistance” in plenary from those who say “this is not fast enough,” said Jed Koball, a missionary advisory delegate from Peru.

“This is so urgent. We don’t have the time to be debating these things. … We’ve got to move,” he said. “How we invest our money is a reflection of our hope for the future,” to a commitment to renewable energy and ending reliance on fossil fuels. Koball said of the amended ENV-09: “I do not feel it answers to the spirit” of ENV-07, which calls for categorical divestment.

But Lisa Heckman, a minister from the Presbytery of Susquehanna Valley, said that “just as when we pray, and the answer from God is not the answer we want, it is still an answer.” The committee’s action is an answer, she said, but “maybe not the one people wanted to hear.”

The committee did add language to the recommendations to reflect the concerns about the urgency of global warming.

“We acknowledge that these measures are inadequate to the urgency and level of crisis before us and we, therefore, urge our congregations and members to become the needed, faithful change we seek by being carbon-neutral, net-zero, or even carbon positive by 2030,” the revised recommendation states.

The committee’s action also includes a comment stating that the committee “recognizes the faithful conviction, passion, and work from over 40 presbyteries” involved in presenting the overtures and concurrences. “We pray that the amended resolution … will address the urgent and critical environmental issues” those overtures raise, as it “supports selected divestment while also continuing to apply pressure as advocates with corporations in need of reform.”

Commissioner Edward Yokley, a ruling elder from Foothills Presbytery, said he wanted to “salute those presbyteries” who supported ENV-07 while not approving its recommendations. “We need to bow to that work and to that broad base of sentiment,” Yokley said.

“There are many people who need this work done yesterday,” said Marta Pomroy, a theological advisory student delegate from Austin Presbyterian Theological Seminary. She lives in Cedar Rapids, Iowa, which has endured a series of climate-related natural disasters. “We do know this is an urgent matter, and we’re not moving fast enough,” Pomroy said.

Rachel Crumley, a minister from Shenandoah Presbytery, was one of the leaders of an informal committee work team that labored into the night on June 24 to use the architecture of ENV-09, from Seattle Presbytery, as a scaffolding to combine elements from five overtures addressing concerns regarding climate change.

Another possibility Crumley raised: the assembly could ask MRTI to expand its engagements, to interact with companies more explicitly about plastics, mining or fracking, in addition to greenhouse gas emissions.