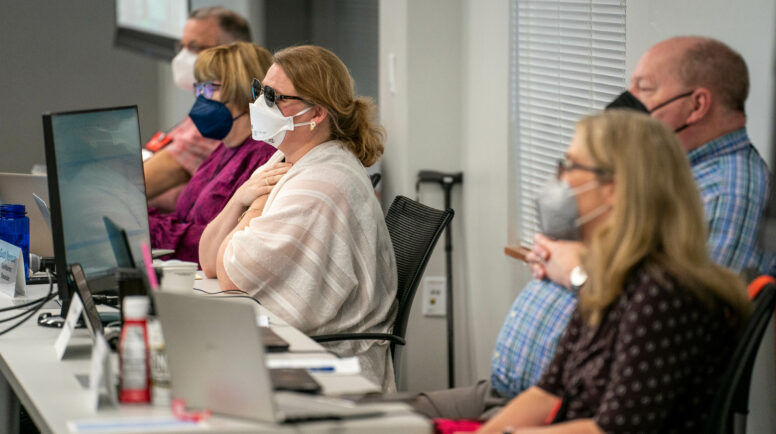 The heavily-debated proposal (MOV-02, item 1) to move MES (formerly Mission Funding) came from the Moving Forward Implementation Special Committee (MFISC) — which interprets Presbyterian mission and raises funds for it. It was presented by MFISC co-Chair Eric Beene of Redwoods Presbytery as an “attempt to make funding more equitable.” He noted that PMA is funded by several sources, but OGA is dependent upon per capita for nearly all its funding.

Commissioner Christina Gleason of New Castle Presbytery said, “The elephant in the room is that MES serves two entities [OGA and PMA],” she said, “but is lodged in only one of the two.”

PMA Board Chair Warren Lesane, Jr. of the Synod of Mid-Atlantic, argued against moving MES out of PMA umbrella. According to Lesane, the board was willing and had already begun expanding the work of MES to include fundraising for per capita and the Presbyterian Historical Society (PHS) — both of which are financially stressed. “MES is on a growth trajectory,” he said. “There is a better way to accomplish this objective” [of broadening MES’s scope of activity]. Lesane didn’t say how much MES has raised to date for per capita and PHS.

MFISC was clearly the driver behind the proposed move. Both OGA and ASG expressed neutrality about it. “We take no position on this — our job is to help all ministries flourish,” said ASG Director Kathy Leuckert. “We don’t see any major change in how MES operates,” she continued. “And we have proven to be an effective bridge between PMA and OGA.”

Repeatedly asked by committee members why the move is necessary, MFISC co-Chair Debra Avery of Southeast Illinois Presbytery said “structural and funding imbalances” need to be fixed. “This is the last piece of the ASG puzzle,” she noted, referring to the relatively new (2018) consolidation of a number of “corporate utility” functions in the administrative group.

Evan Hansen of Geneva Presbytery acknowledged that the MES system “right now seems to be working. But when stress hits a system, there’s a tendency to revert, and OGA and PMA have been at loggerheads in the past.” MES should be lodged in ASG, Hansen concluded, “because it’s the tie that binds and holds our agencies together.”

The vote to recommend the move passed 18-9.

Turning to a proposal with more immediate financial implications, the committee approved a new “Unrestricted Receipts Distribution Policy” that, if approved by the full assembly, will divide all unrestricted gifts to the denomination at the rate of 70% for PMA and 30% for OGA. That proposal (MOV-02, item 6) passed 23-3.

The current formula specifies an 80-20 PMA/OGA split of unrestricted bequests above $50,000, with PMA receiving 100% of all unrestricted bequests under that amount. The MFISC had recommended a 50-50 split of all unrestricted gifts. The amendment to reduce the formula to 70-30 split was introduced by three Young Adult Advisory Delegates: Emily Martin of North Central California Presbytery, Zoe Goode of Cincinnati Presbytery and Adriana Soto-Acevedo of Presbiterio De San Juan in Puerto Rico.

The MFISC proposal was also amended to provide greater clarity with language suggested by ASG. The ASG amendment was supported by MFISC’s Avery. “We love this!” she said.

As with most business that involves significant dollars, the committee debate was intense, but always civil. “People think of ‘Louisville’ as one thing,” said COGA Chair Stephanie Anthony. “So we want funds that come to ‘Louisville’ to be shared more equitably because undesignated gifts are supposed to support the whole mission of the church.”

Noting that in the 2023-24 budget cycle PMA has allocated a total of $1.5 million from surplus reserves and a large gift to ease the pressure on the OGA budget, incoming PMA Board Chair Shannan Vance-Ocampo, said the 80-20 split “is based on the size of PMA and OGA.”

Anthony praised PMA’s contributions to the OGA budget. But, he added, counting on a donation from PMA “if there’s money available … is not a responsible way to run OGA.”

OGA Budget Officer DeAmber Clopton said her agency anticipates $3 million in deficits in 2023-24. And by 2025, OGA will have exhausted its reserves, added OGA Deputy Stated Clerk Kerry Rice. Without changes to distribution formulae and with per capita receipts continuing to fall with the decline in PC(USA) membership, OGA’s financial fortunes are destined to decline.

For PMA, the challenge is to offset the $250,000 loss the mission budget will take if the new distribution formula is approved by the total assembly. Barry Creech, PMA’s deputy executive director for administration, told the committee: “That means either finding additional revenue sources or reducing programs that are funded with unrestricted contributions.”