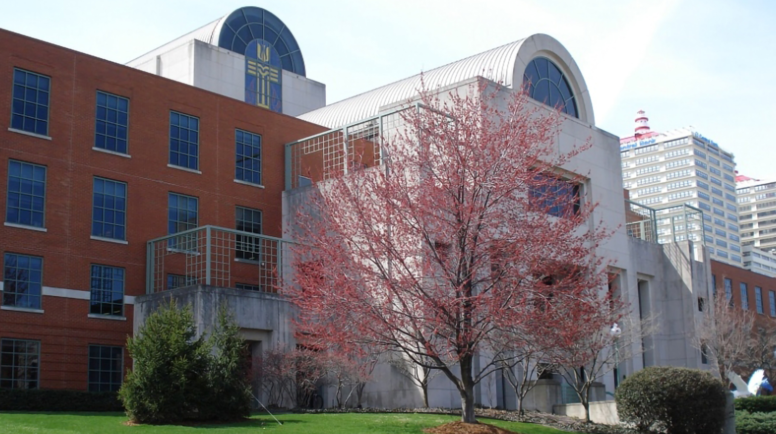 The Presbyterian Center in Louisville.

With the intensity of the 2022 General Assembly starting to recede in the rear-view mirror, Presbyterian decision-makers are looking forward to the challenges ahead.

The board of the Presbyterian Church (U.S.A.), A Corporation, meeting via Zoom Aug. 25-26, discussed the denomination’s long-term information technology needs, how the PC(USA) can work more closely in partnership on issues of equity and inclusion in Louisville, and the process for nominating people to serve on a commission and a team that will be considering the structure and funding system at the top levels of the denomination. Here’s more on those discussions.

Nominations. One of the assembly’s key decisions was to create a new commission to unify the Presbyterian Mission Agency (PMA) and the Office of the General Assembly (OGA) – to restructure the top level of the denomination.

The assembly also voted to create a Funding Model Development team to develop possible funding model experiments – possible alternatives to the current per capita system used to fund the work of OGA.

The A Corporation board will have seats on both those new bodies and is in the process of submitting names for consideration to the co-moderators of the 2022 assembly, Shavon Starling Louis and Ruth Santana-Grace, who will make the final call on who will serve on those groups. Assistant Stated Clerk and Manager for GA Nominations valerie izumi said “the commission is a priority for the co-moderators” and Oct. 19 is the deadline for nominations to be received to serve on the 12-person commission.

“In a lot of ways, this commission is unprecedented,” said Kerry Rice, deputy stated clerk. “Merging of two agencies is different from what we’ve done before. … It’s going to be a journey.”

Technology. The board heard a detailed report from Build Consulting proposing a roadmap for information technology (IT) changes for the PC(USA). Founding partner David Deal said Build, a consulting firm based in Washington D.C., works to address the technology needs of medium to large-sized nonprofits, including many faith-based groups. Starting last March, Build began assessing the PC(USA)’s IT needs — proposing a five-year plan with a cost estimate of from $5.3 million to $8.8 million.

It hasn’t been decided yet how much of that work the A Corporation might agree to take on.

But the proposal addressed some of the challenges of the denomination’s current IT structure, along with questions Presbyterian leaders might want to consider.

The consultants stressed, for example, the importance of leaders of PC(USA) agencies having a clear vision of what data they want the denomination to collect, and why. “We need a north star to guide us on our vision” — a shared sense among the leadership of what role information technology should play, said David Price of Build.

As it stands now, the PC(USA) lacks some functional capacity to do the needed IT work, the consultants found — for example, project management and information security expertise. “There is no generally recognized leader of IT today,” Price said, and “IT has not had a seat at the leadership table.” One recommendation: the Administrative Services Group should hire a chief information officer. Conducting a search for that position is expected to begin later this year or early in 2023.

Other issues: a redesign of the PC(USA) website www.pcusa.org – “the front porch of your organization,” Price said – which is already underway, but which “may be the biggest hurdle in this roadmap, to get everyone on the same page.”

While the PC(USA) has made real progress on information security since 2016, security concerns are an issue for every organization, Price said. The board discussed details of that in a closed session, to avoid divulging any potential weaknesses in the system.

And the denomination needs to consider how to avoid duplication of applications, and to allow more sharing of data between offices. Within the PC(USA) structure, the consultants found six tools that are being used for sending out email blasts and newsletters. “In general, simple is better” — having so many options brings hidden costs, Price said.

Particularly with financial information and fundraising and constituent data, there could be advantages in sharing more information across departments and agencies, he said. There also may be some resistance.

As part of its work, Build held conversations with dozens of PC(USA) staff members and reviewed IT systems already in use. Part of that feedback showed that new approaches may not be accepted easily. “Change is resisted across the PC(USA) perhaps a little bit more than in other organizations,” Price said. Employees told the consultants: “The culture isn’t ready for collaboration. That hasn’t been modeled or taught.” Also: “Presbyterians don’t like to be told what to do.”

One recommendation: create a high-level technology services steering committee, and also an advisory committee including IT staff members “closer to the ground.”

Ian Hall, chief operating officer for the A Corporation, said funds for some of this work already is included in the 2023 and 2024 budgets that the General Assembly approved earlier this summer. The first steps are likely to involve key hires and strengthening core technological services, Hall said. Questions of whether and how to share data would come later.

Renovations. Bridget-Anne Hampden, co-chair of the board, praised Kathy Lueckert, president of the A Corporation, for her leadership in overseeing the renovation of space on the first floor of the PC(USA)’s national office building in downtown Louisville to serve as conference and meeting space. The 2022 General Assembly was the first group to use the space — holding in-person committee meetings there in June and July. The plan now: for Presbyterian groups to utilize that space for meetings and to rent out the facilities for use by other groups as well, generating an income stream.

This August meeting is the first time the A Corporation board has met in-person since the COVID-19 pandemic began in 2020. “Walking in that door, walking through the door, was such a powerful feeling that just engulfs me,” Hampden said. “I realize without the Lord, this could not have happened.”

But she also praised Lueckert and her staff, along with leadership from the Office of the General Assembly, for “the long tireless hours, the frustration, the restarts … Just making it work. Thank you, thank you, thank you. You have left a legacy.”

Rice said OGA is moving from the fourth floor of the national office building to the first floor — which will give OGA a smaller, more efficient footprint, he said. About half the OGA staff will have offices; the other half will mostly work remotely and use shared “hoteling stations” when they come to the national offices to work.

Other agencies are moving within the building as well. “We’re entering into this interesting time of remote work and hybrid work,” and the implications of that for the stewardship of the building, Lueckert said. Asked how much the final costs for the renovation totaled, Lueckert said some bills are still coming in, particularly related to technology. She hopes to have final figures by the board’s next meeting, via Zoom Dec. 8-9.

Louisville partnerships. Lueckert said that as part of the corporation’s commitment to diversity, equity and inclusion, she followed up on an introduction that former board member Cynthia Campbell made to Nikki Lanier, a local diversity, equity and inclusion consultant. In July, Lanier helped arrange a conversation with a group of Black leaders from Louisville about “how could we partner better,” Lueckert said.

When the PC(USA) decided in 1987 to move its national offices to Louisville, “there was an expectation that the Presbyterian Church headquarters would be an anchor institution here in Louisville, that we would show up in a strong way,” Lueckert said.  That hasn’t always happened.

So in the July meeting, Lueckert asked Black leaders to list some of their organizations’ needs — and she’s exploring ways the PC(USA) might partner with those groups by consulting on capital campaigns, helping with grant writing and providing space for meetings and volunteers. Two entrepreneurs are interested in helping market the denomination’s new conference space. “I’m really excited about the partnerships that may emerge from this,” she said.

J. Herbert Nelson, the PC(USA)’s stated clerk, said the question is “how do we revitalize our sense of call to this place” — a city with a history of racial tension and discrimination long before the police shot and killed Breonna Taylor. “There was a calling for us to come to Louisville and really make a difference,” said Nelson — and now, he wants the PC(USA) to live more fully into that commitment. Earlier this month, he joined an interfaith group praying in downtown Louisville for an end to escalating violence in the city.

Nelson’s desire: that the PC(USA) can demonstrate the role that faith and peacemaking can play in a city’s transformation, that the denomination can “stand out as a beacon of hope, and be what this city asked us to be in the beginning.”

Property. Following a closed session, the board announced that, following the terms of a will from 1957, it had acted to accept a gift to one of the A Corporation’s constituent corporations of real property — an estate known as Burnamwood or the William Embry House in Richmond, Kentucky. The action taken states that the property would be from Louisville Presbyterian Theological Seminary, as provided for in the will, and the intent is to sell the property and use the proceeds, as provided for in the will, “for the promotion of world peace or otherwise …