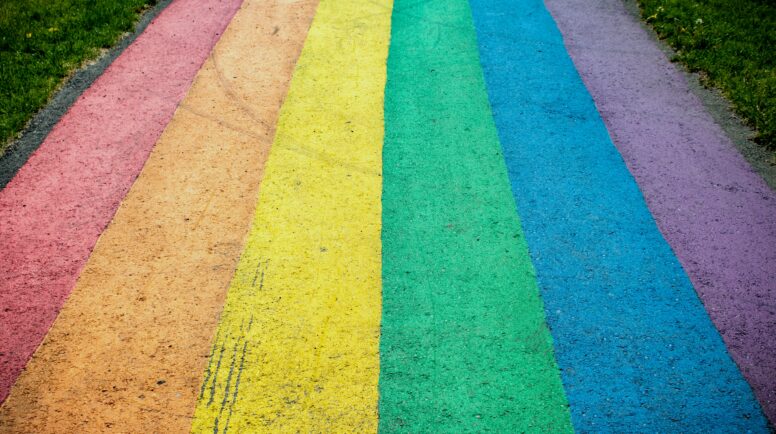 Photo by Rene Baker on Unsplash

On the final afternoon of week five at the Montreat Youth Conference, more than 80 teens and adults crowded onto a giant porch, chatting enthusiastically and clutching giant Freeze Pops in every color. A handmade banner read “Welcome All to Queer Fellowship.” On a poster, people wrote affirmations like “you’re awesome” and “God loves you exactly as you are.” There was no programmed activity, just space, an offer of connection and a promise that on that porch everyone was honored in their full createdness with joy and without exception.

We adults who work with youth in any capacity owe this kind of space to every young person in our care. Yet in the moment, I marveled at the miracle of enthusiasm and simplicity around me. Preston Hollow Presbyterian Church, the congregation that raised me and which I was now serving as a back home group leader, hosted this gathering of LGBTQIA+ folks and allies. About 10% of conference participants came to the porch that afternoon. Even in the familiar space of Montreat, where I attended conferences all through high school, the scene did not translate across time. No, as a teenager I would not have known to imagine such a thing.

In some ways, things have changed rapidly in the few years since I graduated from high school in 2009. At that time, anti-gay sentiment was widely normalized, accepted and promoted by large swaths of society, including the church. President Barack Obama publicly opposed marriage equality. The Presbyterian Church (U.S.A.) did not yet allow the ordination of openly LGBTQ+ individuals or affirm the marriages of queer people. Soon after, a series of horrific and highly publicized deaths of gay youth by suicide would lead to heightened awareness of the consequences of homophobia and the launch of the It Gets Better Project.

The following years saw an exponential rise in visibility of lesbian, gay, bisexual, transgender, queer, intersex, asexual and so many more experiences and identities. Increased political and civil rights and social acceptance followed close behind. Today, some mainline churches are blessed with LGBTQ+ clergy, sharing pronouns is a normal part of many progressive meetings and queer media is fully part of the mainstream.

But when I was a youth, not so very long ago, I didn’t know any out queer people at church. I didn’t meet any at Mo-Ranch or Montreat conferences. There were no vocally or visibly out adults in my little Presbyterian universe. I didn’t hear overt messages of exclusion in that world, but the absence of positive, inclusive messages and affirming theology reinforced the culturally normative story that Christianity was fundamentally separate from LGBTQIA+ identities. I considered myself an ally at the time and believed that was in line with Jesus’ command to love my neighbor, but I assumed my gay neighbor was somewhere, anywhere, other than the church.

So it was a bit groundbreaking for me when, on the last night of my own senior-year Montreat Youth Conference, my friend Melissa came out as bisexual. “I just wanted y’all to know,” she said through tears. We all responded with love and affirmation, especially the tight-knit group of seniors, and then we scattered to the four winds for college and the rest of our lives.

I thought of Melissa as I hovered on the porch at Montreat just a couple weeks ago. I thought, too, of the young person who had inspired last year’s inaugural iteration of the LGBTQ+ porch event when they sat next to me at a coloring table and said, warily, “My parents made me come to this. I had no idea there would be so many gay people. And, adults.” Like me at their age, they thought being queer and being Christian was diametrically opposed. They thought being in a faith space would mean erasing part of themself. The difference is, they arrived at church camp and found people who invited them to start telling a new story. To make sure kids knew they weren’t alone, we threw a party with the help of the Preston Hollow youth and the endorsement of Montreat staff. It was a hit, and it only made sense to reprise it this year. After seeing everyone crammed onto the porch, it seems like next year we will need a bigger venue! Thanks be to God for that.

It will take all of us and God’s help to weave this new story until it is strong and vibrant enough to block out the dangerous myth that there is something inherently sinful or broken about LGBTQIA+ people. It will take porch parties, Pride Sundays, political organizing, book studies and a whole lot of hope.

Simply put, adults who love queer and trans young people have to be louder and more determined than the adults who don’t. In 2022, the reactionary attacks of politicians and Christian leaders designed to dehumanize, denigrate and disappear LGBTQ+ people, including children and teens, have gained far too much traction. More than 250 proposed laws have come before state legislatures this year designed to curtail the rights of LGBTQ+ people, especially the rights of transgender youth to play school sports, use bathrooms, access health care and more.

The result? Alabama families with trans kids are in turmoil as they remain unsure if they will have access to care for their children. As Florida teachers kick off a new school year, they have to contend with the so-called “Don’t Say Gay Bill” that limits how teachers can discuss gender and sexuality. And in late July, 20 attorneys general sued the federal government over the right to exclude LGBTQ+ kids from school lunch programs. Such measures will disproportionately impact kids who are poor, those who live in rural areas and youth of color.

Even if such bills don’t become law, there’s the psychological burden placed on young people of knowing that adults with power are committed to stripping their rights and diminishing their happiness, health and journeys of self-discovery. Every day, youth see messages locally and nationally that adults who have never met them know better than they do about who they are and can be, and they are bombarded over and over with the idea that there is something wrong with them.

Despite these persistent challenges, trans and queer youth are everywhere, including in our churches, creating flourishing communities of care, imaginative paths toward wholeness and abundant approaches to language and identity that welcome everyone to the table. They have much to teach us, and they deserve for us to listen and respond.

In many cases, we have made that commitment to our young people through baptism, which makes a claim not just on the life of the person being baptized but on the entire community when we promise to guide and nurture that person by word and deed, with love and prayer. Each time we make this promise we are to be transformed by it as we embrace our responsibility to raise the next generation in faithfulness and love. It is not a promise contingent on what the baptized person does or who they grow up to be. This commitment is as unconditional as God’s grace and it requires us to speak and act with love, encouragement and support.

In the spirit of that promise, we adults must take continuous and faithful action to make sure all our young people have the support, space and resources they need to not just survive but thrive. The first crucial step is to affirm and embrace the young people in your care. According to the Trevor Project, the presence of a single affirming adult reduces the likelihood of a young person attempting suicide by 40%. Our support can literally be lifesaving.

With that as our foundation, we can each apply gifts and energy as we feel called. Whether it’s providing fellowship space for queer teens and allies, making sure your church has gender neutral bathrooms, volunteering with a local youth organization or rallying at your state legislature, we each have something to contribute. The most important thing to do is simply ask the youth we have the privilege of knowing about what would make a positive difference for them in their lives, their faith journeys, their spaces and their communities. The stakes couldn’t be higher and the times couldn’t be more urgent. With legislative and judicial efforts to come, we risk losing so much of the ground advocates have fought for over the past 50 years.

If you aren’t sure where to start, resources abound. Leigh Finke’s wonderful pair of books, Queerfully and Wonderfully Made: A Guide for LGBTQ+ Christian Teens and Welcoming and Affirming: A Guide to Supporting and Working with LGBTQ+ Christian Youth, are a fabulous starting point. There are organizations like Affirming Youth Ministries that provide educational resources and consulting options. Within the denomination, More Light Presbyterians (where I serve as co moderator of the board of directors) and Covenant Network continue to advocate for the full inclusion and thriving of LGBTQIA+ people in the church and beyond. An inspiring effort happened recently as kin·dom community, an affirming new worshiping community based in North Texas and led by Rev. Pepa Paniagua, hosted its first LGBTQIA+ youth camp in partnership with Camp Gilmont.

It really can start with something as simple as frozen treats on the porch. Perhaps I’m biased because it is hard to imagine how it might have affected the trajectory of my life if, at age 15, someone had said plainly and emphatically, “God loves LGBTQ people” and handed me a snack. Perhaps I would never have feared that who God made me to be could somehow separate me from God’s love. There’s no way of knowing for sure. All I can promise is that I will keep handing out as many Freeze Pops as I can. I hope you’ll join me. 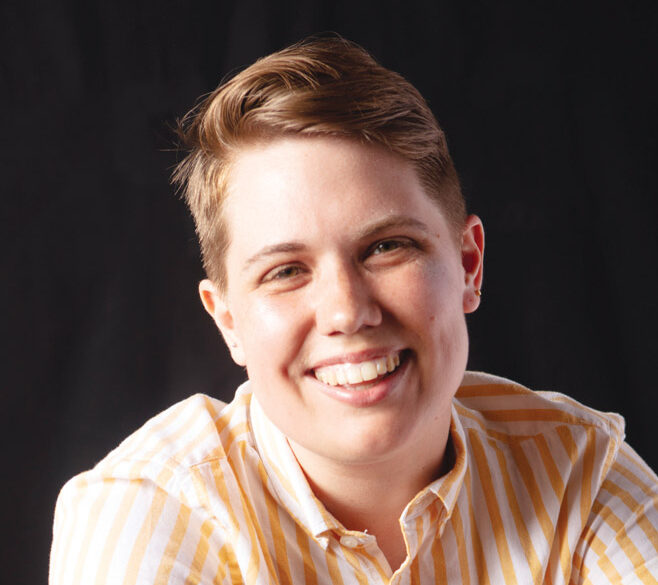 Adrian White is a writer and Texan living in Nashville, Tennessee. They graduated from Vanderbilt Divinity School in May with a Master of Divinity. Adrian grew up in the PC(USA) and feels called to the work of bringing to life the church’s growing commitments to the inclusion and thriving of all children of God! They are proud to serve on the board of More Light Presbyterians. In Nashville, Adrian serves at Woodland Presbyterian Church and organizes with Southerners On New Ground (SONG). When not working and studying, Adrian enjoys playing board games with their spouse Wynn and taking long walks with their dog Bex.