Larissa Kwong Abazia really wanted the article about her being vice moderator with the Presbyterian Outlook to be a MadLib.  She thought it would bring people together. But since that hasn’t happened yet, here is a General Assembly MadLib.  May it further build up Christ’s Church in Love, Peace, and Unity.  Play it with your friends!

To play: (if you’ve never MadLibbed before) find a fellow Presbyterian, ask them to give you words to fill in the blanks without showing them the rest of the MadLib.  When it’s all filled out, read it out loud and try not to giggle too loud in plenary.  MadLibs, like GA, are about bringing people together.  Have fun today!

Alex Wirth is an ordained teaching elder doing building maintenance and social justice work at Lake View Presbyterian Church in Chicago. He buys vinyl albums more than mp3s, tries to ride his bike more than drive a car, make/bake things more than buy them, and generally stick to a punk rock, do-it-yourself mindset like Jesus did. 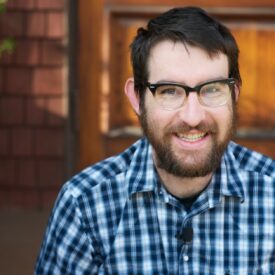