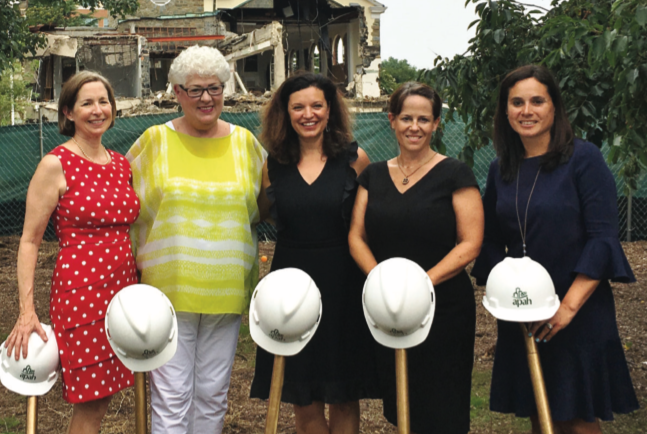 Gilliam Place groundbreaking, which was held in the garden space. The church in the process of demolition is in the background. In the foreground with the shovels are (left to right): Nina Janopaul, president of the Arlington Partnership for Affordable Housing (APAH); Susan Etherton, member of Arlington Presbyterian Church; Jill Norcross, project manager for Arlington Presbyterian CHurch; Carmen Romero, APAH; Laura London, APAH.

Sometimes a congregation decides to sell all or part of its property because it needs the money. And sometimes the decision to sell is part of a vision for what the neighborhood needs.

Whether from pragmatism or a sense of purpose, the connection between a church and its land can lead to soul-searching about what the congregation is called to be – and to new understanding of ministry.

Here are the stories of two congregations on that path.

For Rock Spring Presbyterian Church in Atlanta, the decision made in early 2016 to sell its manse was born of financial need. Without some additional source of money, “they were unable to continue more than a couple of months financially,” said Beverly Friedlander Ostrowski, now the church’s interim pastor. “There was very little money in the bank to cover expenses.”

Rock Spring is located on a fairly busy section of Piedmont Avenue – a commercial district in mid-town Atlanta. “It’s a fairly upscale neighborhood and we are heavily traveled with a homeless population as well,” Ostrowski said.

The church will celebrate its 150th anniversary in 2020. Selling the manse allowed it to repay loans it had taken from restricted funds, and for a period of time to pay a contract or interim pastor. The congregation voted to sell its manse and an L-shaped section of land behind it to a developer; the manse will be torn down, and the land will be used to build nine new “very high-priced homes,” Ostrowski said.

“There was a lot of debate” before the decision to sell was made, she said, and “a lot of conversation about how to preserve the neighborhood.” The congregation decided to seek landmark status for the exterior of its church building, so whatever happens next, at least that part of the structure will remain.

Rock Spring – a small congregation with about 30 in worship on a typical Sunday in a sanctuary that seats 200 – is talking about what do with the money. “Now we have to decide whether we’re going to give it all away, or whether we’re reinvigorating,” Ostrowski said.

The congregation already has decided to give some of the proceeds away for mission — with $50,000 going to Presbyterian Disaster Assistance and $100,000 to the Community Foundation of Greater Atlanta to support senior housing and services for the homeless.

“We’ve had a long-time relationship with people in need of shelter,” sometimes literally sleeping on the church’s doorstep, Ostrowski said. “We wanted to do something concrete where we can make a real difference.”

Despite that commitment, the sale of the property (which was finalized in February 2018) was “full of a lot of grief,” she said. “A lot of sadness, because this congregation has launched people into larger ministries within the denomination and we’ve been historically a really vibrant congregation. And to come to the place where we had to sell the property led to the kind of conflicts that arise — grief and sorrow and pain and the recognition that we aren’t what we used to be.”

At the same time, “their imagination is really beginning to dream of ‘Now what?’ ” — with real energy emerging around the idea of partnership, perhaps with a new church development, a school or a nonprofit.

The Presbytery of Greater Atlanta has provided valuable support, Ostrowski said — helping find a contract pastor when the church was on the verge of bankruptcy, establishing an administrative commission to help manage finances.

There’s been a lot of conversation about legacy, Ostrowski said. For now, “we have not closed. We are here. We are doing good” — with outreach through a sandwich ministry for the hungry twice a week; a clothes closet that provides blankets and socks; and involvement with the advocacy group Presbyterians for A Better Georgia.

The sale has also led to a deepening of faith. “God is using us here, so we don’t need to be afraid for the future,” Ostrowski said. “Either way, I think it’s biblical — whether we live or whether we die,” if the focus is not on survival, but serving God.

Even after the congregation of Arlington Presbyterian Church in northern Virginia made its decision to sell its church in 2015 to make space for affordable housing – a decision a long time in coming, and not made without difficulty – things continued to shift. In 2017, the congregation realized the developer wasn’t going to use a chunk of the land, so they struck a deal to buy back that piece of the property to preserve it for community green space.

“At each juncture, we imagine it’s the end of the story, and it’s not,” said Susan Robbins Etherton, a ruling elder who has been deeply involved in the process. When the decision was made to sell the building and a final worship service was held in that space, some thought the church was closing. “It’s kind of nice to say no, that was never our intent. We’re in the desert right now,” using space at a Methodist facility now while waiting for retail space to be competed at the new housing development — space Arlington Presbyterian will have an option to lease. For now, “we’ve pitched our tent there,” at the Methodist church, “and we’re wandering,” Etherton said.

“Buying the land back was a real pivotal moment in the way we began to think of ourselves,” she said. The developer was planning to sell two lots that would be used for single-family homes, and “we literally came in at the 11th hour” to buy the land for green space, a need the Arlington Presbyterian congregation had discerned through its continuing conversations in the community.

“God was in the midst of it, because we were still listening,” Etherton said. “I’ve talked to so many congregations who are motivated [to sell property] because they need the money to survive or they see this as a good financial or business transaction.”

She encourages them to take a step back – to look for where God is leading.

Arlington Presbyterian Church, a small congregation with about 25 in worship on a typical Sunday – “small but mighty, that’s what we say,” as Etherton put it – learned from its own mistakes.

Earlier, searching for a new direction in ministry, church leaders had decided after a session retreat to consider focusing on affordable housing. The session took the idea to the congregation, and “they said, ‘Why?’ ” Etherton recalled. “We had no backstory. We had no real reason.” And the congregation basically said, “We don’t believe you had a vision from God.”

So the session started over — going through a thoughtful, prayerful period of discernment that included a New Beginnings assessment, hiring a consultant, prayer, Bible study and a period of committed listening to the community.

“We kept hoping people would come through those red doors, and nobody was coming,” Etherton said. “It was clear we needed to go outside — go out the doors and into the community.” They headed out two-by-two to the farmer’s market, to restaurants and stores, to the dog park.

She talked to a server at a restaurant who had grown up in the community, but “he couldn’t afford to live there. We heard that from grocery clerks, that housing was too expensive. ” Also: “We really need a place to connect. We live at a crossroads. There are very diverse demographics. But where is the place where we can connect with our neighbors?”

The church rented space in its parking lot on Saturdays to a food truck, and Etherton and her husband would set up chairs and tables and visit with people as they ate their food. Over time, the conversations became less awkward, “it became a delight and not a chore. It became an adventure. What am I going to see and hear today? … Who am I going to meet?”

Etherton and others visited nonprofits in the area to learn of the work they were engaged with – to find out what was already being done well and to avoid duplication. Among those conversations: the Arlington Partnership for Affordable Housing.

“We would listen with the lens of God and Scripture,” Etherton said. “We have this slogan — start with prayer, sustain with prayer, end with prayer.” Also: “If this is of God, it will happen. We couldn’t force things. … You have to be coming from a place of listening for the movement of the Holy Spirit in what you’re doing.”

Over time, the congregation came to the decision – with the approval of the presbytery – to sell its property to make space for affordable housing, and later to buy back enough land for a green space. Arlington just called a new pastor, and is waiting for whatever comes next. O