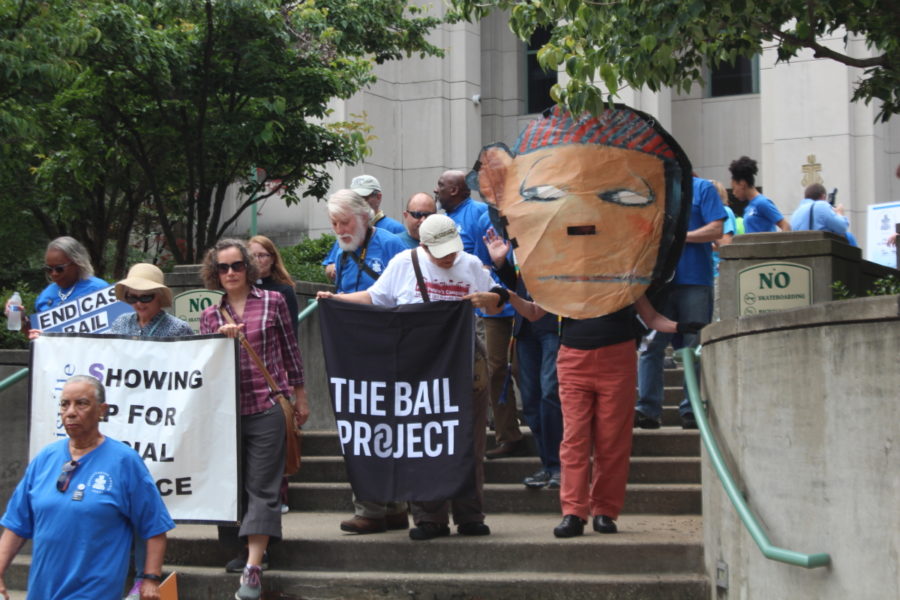 LOUISVILLE (Outlook) – Marching through downtown Louisville shouting “End cash bail!” and toting “Freedom should be free” signs, a group of employees from the national offices of the Presbyterian Church (U.S.A.) led a rally June 12 calling for the end of a system they say is unjust and exacts a too-harsh price from low-income people arrested for minor offenses.

“This is not a flash in the pan work,” said J. Herbert Nelson, the PC(IUSA)’s stated clerk, who marched at the front of a line of more than 100 people – many of them PC(USA) employees. “We are planning to stay together and stand together” until the system of cash bail ends across the nation.

Jimmie Hawkins, director of the PC(USA)’s Office of Public Witness, prayed after the march led to a rally in Jefferson Square – across the street from the county jail – “that the prison doors and jail doors may be thrown open.”

And Kevin Cosby, who leads St. Stephen Church, one of the most prominent black churches in the city, said that Presbyterians are on the right side of the justice issue, not like some “cultural Christians” unwilling to speak out against injustice. “They do not know that Jesus is always the spokesperson for the least, the lost and the left out,” Cosby said, calling cash bail reform “a moral issue” in an “incarceration nation.” 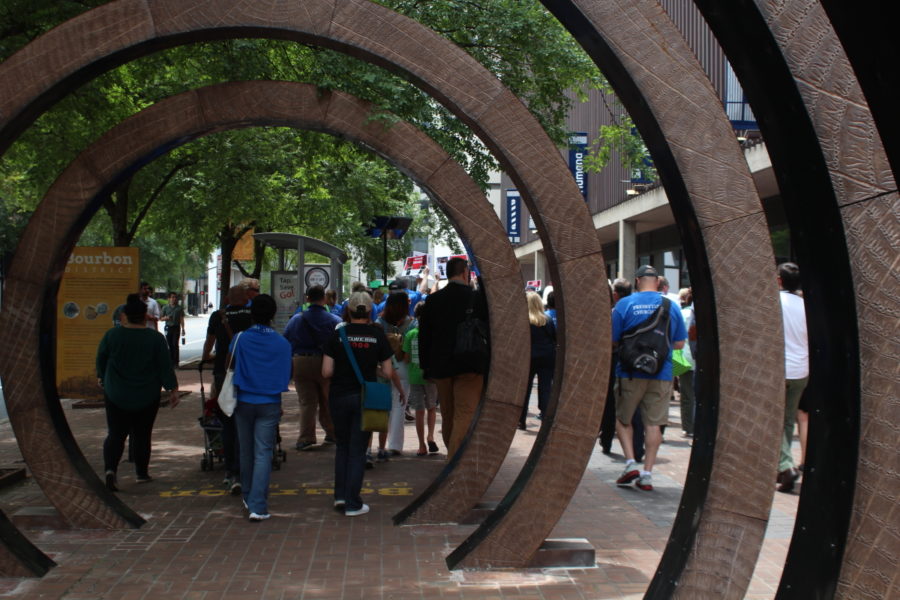 Incarceration disproportionately affects low-income people and people of color – particularly African American men, Cosby said. He spoke of “how we have criminalized certain sections of our country. The system is rigged against poor and black people. … Let’s cause an earthquake in Louisville until those who are incarcerated are set free.”

Increasingly, cash bail reform is becoming an issue in the public eye nationally – drawing attention from state legislators, courts and civil rights activists. The argument: low-income people who are charged with relatively minor offenses are being kept in jail for long periods of time – at taxpayer expense – because they cannot afford the bail that would allow them to be released until their cases are adjudicated.

People kept in jail because they can’t afford bail often lose their jobs, get evicted from their apartments, can’t make their car payments.

Already, some states adopted new rules that either eliminate cash bail (California, in August 2018) or curtailed its use (including New Jersey, New Mexico, Arizona and New York).

In Louisville, The Bail Project has had a presence for about a year – one of more than a dozen locations where activists known as “bail disruptors” are working to raise money to get people charged with low-level offenses released on bail. Supporters say those released on bail are not more likely to either be rearrested or fail to show up in court than those kept behind bars. The money raised is recycled – meaning that when someone shows up for a court date, bond money they posted is returned and The Bail Project can use it for someone else.

In Jefferson County, about 85% of those held in the jail are considered minimum security inmates – arrested for minor offenses such as theft of property, writing bad checks, public intoxication or possession of drugs, said Steve Durham, the assistant director of Louisville Metro Department of Corrections.

The cost to taxpayers for keeping people in jail: a $300 booking fee, plus $80 a day. In 2017, the jail in Louisville experienced overcrowding – with at times more than 500 inmates beyond capacity, Durham said, and inmates sleeping on the floor. “That is not tolerable,” Durham said. “That is not justice.”

And statewide, a recent study from the Center for Economic Policy found practices that were “wildly inconsistent” in the way that Kentucky’s counties apply cash bail to those charged with relatively minor offenses.

The Louisville march continues a push for reform that PC(USA) leaders started at the 2018 General Assembly, when hundreds of Presbyterians took to the streets of downtown St. Louis to deliver a check for $47,200 to be used for bond relief.

That march was done collaboratively with local networks working on bond reform in St. Louis, including Arch City Defenders and The Bail Project.

That’s a pattern that Nelson has followed in Kentucky as well, partnering with Shameka Parrish-Wright, site manager for The Bail Project in Louisville; with leaders of Louisville Metro Corrections; and with local faith and elected leaders and community activists. For example, the organizers read a letter at the rally from Greg Fischer, Louisville’s mayor, saying it’s important to address racial disparities and “find solutions that are fair and effective.”

Nelson has been speaking consistently in recent months about his desire to have the PC(USA) be more of a presence in Louisville, using its national office building along the Ohio River in downtown Louisville in ways that connect with the city – getting involved on issues such as homelessness and mass incarceration.

There’s also been an intention to connect the General Assembly with work being done on justice issues in the communities where the assembly is being held – in Baltimore in 2020 and Columbus in 2022.

Parrish-Wright told part of her own story: how, as an 18-year-old single mom living in a housing project, she was arrested because of a domestic dispute. She spent 38 days in jail and lost her job – not certain when she was behind bars was who was taking care of her daughter, then a toddler. Eventually, she plead guilty – although she didn’t think she’d done anything wrong – to get back to her daughter and try to go to college.

“This happens every day,” Parrish-Wright said in an interview. “You could be sitting in there (in jail) for $500 for a year.” In Louisville, The Bail Project pays the bail for people who can’t afford it – more than 900 people over the last year, with the help of a revolving national bail fund – and has found that 90% come to court for their hearings and 90% do not reoffend while their cases are pending.

At the rally, Presbyterian leaders presented a check for $10,000 to be used to help bail out people charged with low-level offenses. Kathy Francis, director of communications for the Presbyterian Mission Agency, said the funds came from national staff members (who raised money through Giving Tuesday and fundraisers such as bake sales) and from contributions from individuals in the community.

Wright-Parrish said she also planned to pull in more than $100,000 in funds from The Bail Project’s national bond fund — enough to bail out 50 people from jail.

Most of those at the rally were members of the PC(USA)’s national staff – evident in part because most wore bright blue t-shirts with the PC(USA) name. Others included several local pastors and members of Presbyterian congregations; people from Louisville Presbyterian Theological Seminary; and a group of lawyers from the Department of Public Advocacy – Kentucky’s public defender system – who were attending a Kentucky Bar Association event at a hotel along the march route and who came out to offer support.

Nelson led the group in prayer during that part of the march – followed by Alonzo Johnson, who is coordinator of the Presbyterian Committee on the Self Development of People and had led the marchers with drumming, asking the crowd to “Be like the Red Sea and part,” so that a car could get through.

The march – held during the middle of a workday – drew some support from passersby, while others went about their business. A man leaning against a building, texting with his briefcase at his feet, didn’t look up as the marchers passed by. Another man walked past with his dog, not breaking stride.

Others, however, share the concern and commitment to change the system. One at the march who doesn’t work for the PC(USA) was Michael Tee, who’s involved with Louisville SURJ (Showing Up for Racial Justice).

“I’ve been going door to door with the bail project,” talking to people about the need for cash bail reform, Tee said in an interview. The response “ has been surprisingly positive. I was a little leery,” but as he explains the idea of cash bail reform at homes in working class neighborhoods, people seem to understand – with some telling their own stories of encounters with the justice system.

“People of all colors are pretty supportive,” Tee said. “They pretty much get it when you explain that people could potentially lose their housing, their kids, their jobs.”