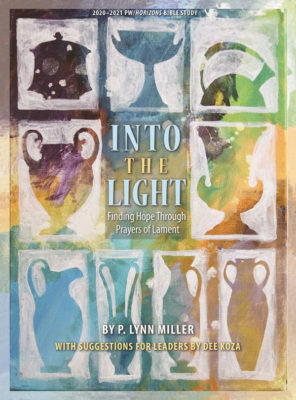 What do you do with your anger? What do you do with rage? Do you bottle it up until you explode, or does it come out sideways in nagging or snide remarks? Do you run, pull weeds, clean with a manic intensity or do something that will wear you out? Do you hold on to your anger like a treasured possession, and rehearse it over and over again?

Most of us would be shocked if anger was a part of a worship service. But that is what the people of Israel did. They offered up their anger, rage and desire for terrible revenge to God.

Consider Psalm 137. If we used it in worship at all, we would probably leave out verses 8 and 9:

Is this a religiously sanctioned call to violence? The sentiments expressed in these verses are shocking and hardly square with Jesus telling us to love our enemies. It is not a call to violence. It is an honest prayer arising out of unimaginable devastation. Jerusalem and the temple have been destroyed and all but the poorest people have been taken into captivity by the empire of Babylon. The captors torment the captives by asking them to sing a song of praise to their God, who, in the Babylonian mind, had been defeated. The psalm is offered to God who knows how terribly they have suffered. The psalm is an act of defiance that affirms that Jerusalem, the holy place of God, will not be forgotten and that the songs of praise to God will continue.

There are other psalms of communal lament that include cursing one’s enemy: Psalms 69, 58, 109, 129 and 140. These psalms have some vivid lines about what that those praying want God to do to their enemy.

O God, break the teeth in their mouths;
tear out the fangs of the young lions, O Lord!
Let them be like the snail that dissolves into slime;
like the untimely birth that never sees the sun. (Psalm 58:6,8)

Those who surround me lift up their heads;
let the mischief of their lips overwhelm them!
Let burning coals fall on them!
Let them be flung into pits, no more to rise! (Psalm 140:8-9)

I imagine that there have been times when most of us are boiling mad about something and we want to pay back the harm we have received. We want the downfall of the bully. We would like to see the one who has betrayed us squirm or burn with shame.

Anger and rage are signals to us that something is badly wrong. Anger tells us of a threat to our well-being or treasured values, or that an injustice has been heaped upon us. To express anger to God helps us know that the anger is real and, perhaps, justified. It is saying to God: “Lord, this person has treated me like dirt. I am so dang mad that I could spit nails!” We come to God who cares for us and is also angry when injustice is done. God can handle everything we feel.

The communal laments of outrage aid us in admitting our own helplessness and dependency on God. We ask God to act for us, trusting that God “loves justice and will not forsake” the faithful (Psalm 37:28). In expressing our desire for revenge, we can leave vengeance to God, who alone is able to judge fairly.

Psalm 137 is a protest against injustice. There are situations about which we should be angry. Over these past months, there has been much to lament and protest. Communal lament and fury have risen all over our nation in the wake of the murders of Ahmaud Arbery, Breonna Taylor, George Floyd and countless others. Like Psalm 137, people cry out saying that what has happened is deeply abhorrent and demands change. The communal laments ask us to remember, pray and act for those who are victims of injustice.

After George Floyd’s murder, I joined in a peaceful protest for the first time. I was surprised that I felt energy and comfort in the midst of others standing up for the basic belief that all people should be treated fairly. It makes me wonder what energy and solace might be available if we mourned, prayed and sang for change in worship, asking God for courage to act for justice. It makes me wonder if God’s grace would be more powerful for us in knowing that God accepts even our worst thoughts.