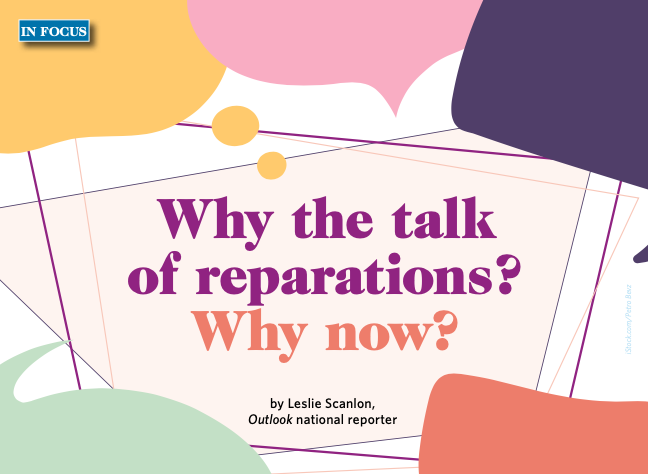 While many Americans may have heard talk of the concept of reparations and may be aware that some universities, seminaries, cities and other institutions have presented proposals for paying reparations, they may be less clear on what exactly reparations are — and why the issue is becoming an increasing part of public discourse now.

In June, Nikole Hannah-Jones published a story in the New York Times Magazine titled “What Is Owed” — making the case that it is time for reparations.

Hannah-Jones is a journalist focusing on racial injustice and civil rights; a recipient of a MacArthur Foundation “Genius” Grant; and winner of a Pulitzer Prize for commentary in 2020 for her opening essay in the New York Times 1619 Project, which traced the history and enduring repercussions of slavery in this country over the past 400 years.

“It feels different this time.”

That’s how Hannah-Jones started her “What Is Owed” article — describing how a summer of protests and a focus on systemic injustice has created momentum after the killing of George Floyd in Minneapolis, a death that she describes as a “modern-day lynching.” If this is to be a truly transformative moment, Hannah-Jones writes, reparations must be a piece of that change —
because “it is white Americans’ centuries-long economic head start that most effectively maintains racial caste today.”

Polling shows a big racial split over reparations. A 2019 Associated Press–NORC Center for Public Affairs Research poll found that only 29% of Americans think the government should pay reparations — but nearly three-fourths of Black Americans (74%) favored cash reparations while 85% of whites opposed them.

A subcommittee of the House Judiciary Committee held a hearing in June 2019 on reparations, but Congress has been unwilling to bring up for a vote a bill that would create a commission to develop reparations proposals (known as HR 40) even though former Rep. John Conyers Jr. of Michigan has introduced legislation on reparations into every session of Congress for nearly 30 years. The idea gained some traction among Democratic candidates during the primary debates for the 2020 election.

Reparations is about repair.

Conversations about reparations center around historical patterns — what specifically has been done in a particular place and time — in the country as a whole, in a particular city or in a neighborhood or entity (such as a school or denomination, a branch of the military or government agency). It’s a way of looking at the injustices perpetuated in that context, and the possible avenues for restitution or repairing the damages.

“This country is built upon slave labor,” Willie James Jennings, associate professor of systemic theology and Africana studies at Yale Divinity School, said during a recent presentation. And “reparations means we have to address structural inequity at the site of the pocketbook, not just at the site of our heads.”

For centuries, the wealth of whites was built on slave labor and structural inequities. That includes:

Slavery was practiced in the British colonies starting in 1619 — it predates the founding of the United States and lasted for 250 years.

Yale professor and historian David Blight has written about the immense economic value to whites of the enslaved people. “In 1860, slaves as an asset were worth more than all of America’s manufacturing, all of the railroads, all of the productive capacity of the United States put together,” Blight wrote. “Slaves were the single largest, by far, financial asset of property in the entire American economy” — collectively worth approximately $3.5 billion.

The unpaid labor the enslaved Blacks produced enriched whites. Their very bodies – the subject of beatings and rapes and violence – were financial assets to whites. Whites owned the children of enslaved Blacks and could and did sell them at will, fracturing families. And white Christianity supported that system — with pastors preaching that it was God’s will.

William Yoo, associate professor of American religious and cultural history at Columbia Theological Seminary, said during a recent Anti-Racism Town Hall presentation, part of the Presbyterian Church (U.S.A.) Week of Action, that “Presbyterians participated in the enslavement of millions of Black Americans.” Individual Presbyterians and some congregations owned enslaved persons. And “white Presbyterians provided religious support for slavery in the forms of sermons and theological works,” Yoo said, some of which gave religious support for the concept of the racial inferiority of Blacks.

The concept of reparations was considered even in the early years of slavery in this country — examples can be found in the 1780s of compensation to persons formerly enslaved.

And at the time of emancipation during the Civil War, the idea of reparations was again lifted up. While emancipation would give Blacks freedom from enslavement, what many longed for and needed was land: a place to live and to farm, and a piece of the land on which they and their families had been forced to work for generations, without pay. So the idea of reparations briefly surfaced.

William A. Darity, an economist at Duke University and the author of “From Here to Equality: Reparations for Black Americans in the Twenty-First Century,” has written that had that promise of 40 acres been fulfilled, that would have amounted to 40 to 45 million acres. Had that land reform taken place, “it is easy to envision that the vast current differences in wealth between blacks and nonblacks would not exist,” Darity wrote in a 2008 essay, “Forty Acres and a Mule in the 21st Century.”

That chain of events left many Black Americans freed from enslavement, but with no land, jobs or means of support. 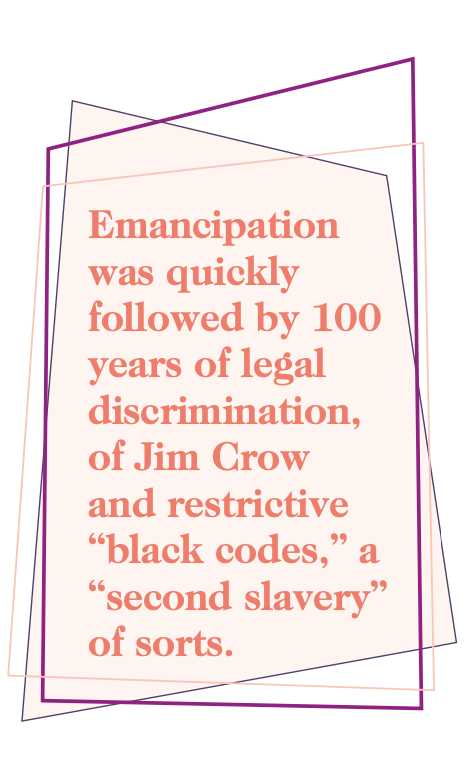 Historian Jim Downs, now a professor of Civil War-era studies at Gettysburg College, has calculated in his book “Sick From Freedom: African-American Illness and Suffering During the Civil War and Reconstruction” that at least a quarter of the four million people who were enslaved and then freed got sick and died between 1862 and 1870, some from a smallpox epidemic. Some starved to death.

Downs has described what happened as “the greatest biological catastrophe of the nineteenth century.”

And emancipation was quickly followed by 100 years of legal discrimination, of Jim Crow and restrictive “black codes,” a “second slavery” of sorts, as author Ta-Nehisi Coates has described it.

Jim Crow laws and practices legitimized anti-Black racism and segregation — controlling where Blacks could live, work, eat and shop; where they could sit on public transportation or use the bathroom; where they went to school; and preventing them from voting. Many Black farmers were sharecroppers or tenant farmers, with the white landowners controlling how much they were charged for seed and supplies and how much they were paid for the crops they grew and harvested with back-breaking labor.

Through all this history, the wealth gap between white and Black Americans accumulated — with the gap by many measures being as wide in 2020 as in 1968, when the Civil Rights Act was passed, according to a Washington Post analysis. The Brookings Institute found that in 2016, the net worth of a typical white family was $171,000 — 10 times greater than that of a typical Black family, with a net worth of $17,150.

At every income level, Black wealth lags behind white. And this year has brought more hard truths, as the COVID-19 pandemic has disproportionately affected people of color.

Some elements of the wealth gap:

The possibility of reparations

Increasingly, the idea of reparations is becoming part of the national conversation — sparked in part by Ta-Nehisi Coates’ 2014 essay in the Atlantic, “The Case for Reparations.”

It’s showing up in the national political debates and, increasingly, in discussion of reparations in local or particular settings — such as cities, schools, congregations, corporations and the military.

A lawsuit filed in September in Oklahoma seeks reparations from the city of Tulsa and other local government agencies for the destruction caused by the 1921 Tulsa Race Massacre, in which white mobs killed an estimated 300 Blacks and decimated 35 blocks of Tulsa’s Greenwood district, home to many Black businesses. It’s estimated as many as 300 people were killed.

In May 2015, the Chicago City Council passed an ordinance giving $5.5 million in reparations to Black survivors of police torture, a race-based targeting of young Black men led by former officer Jon Burge from the 1970s to 1990s. 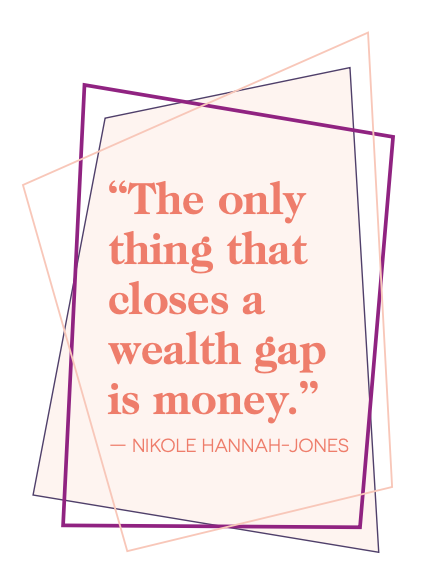 In 2018, the Catholic sisters of the Society of the Sacred Heart created a reparations fund to provide scholarships for Black students at their school in Grand Coteau, Louisiana, in recognition of the reality that the sisters owned an estimated 150 enslaved persons at a school and convents in Louisiana and more in Missouri. The sisters invited descendants of some of those enslaved persons to a memorial gathering, offering formal apologies and honoring those enslaved persons, speaking their names when possible.

“Local action could be even more meaningful to descendent communities than federal policies,” Jennifer Oast, an historian who has studied the relationship between churches and slavery in Virginia, told the Washington Post.

There is plenty of opposition to the idea of reparations — as the polling shows, most white Americans oppose it. Some whites see slavery or Jim Crow as an issue from the past, long gone, something they had no personal responsibility for. What about wealthy Blacks and poor whites? What about people whose families never owned enslaved people? What about the struggle of immigrants who started with nothing? What about the land taken from Native Americans?

Often, the discussion of reparations quickly gets stuck on the details: how much to pay, who should pay and how? That’s part of what the reparations commission that Congress has declined to create might be asked to figure out.

While some approaches to reparations go beyond cash payments (for example, to involve educational opportunities or job training) Hannah-Jones wrote that money has got to be part of the reparations discussions. An apology isn’t enough.

“The center of any reparations program has to be cash payments,” she wrote. “The only thing that closes a wealth gap is money.”

“The Case for Reparations” – by Ta-Nehisi Coates in The Atlantic, June 2014. Also: a Bill Moyers 2018 interview with Coates.

Isabel Wilkerson’s books “Caste: The Origins of Our Discontents,” on the racial hierarchy in American life; and “The Warmth of Other Suns: The Epic Story of America’s Great Migration,” on Jim Crow and the migration of Blacks out of the South.

Report of the PC(USA) Task Force on Reparations from 2004. 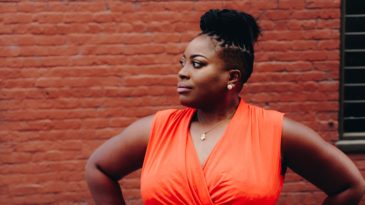