For 144 years, Stillman College, an HBCU (historically Black college or university) in Tuscaloosa, Alabama, started by the Presbyterian Church in 1876 to educate Black ministers, has provided academic opportunities for underserved students in West Alabama and beyond. In the middle of the spring semester 2020, with news of the COVID-19 pandemic spreading in every corner of the world, colleges and universities across the country began planning for how to respond. The challenge of providing the unique educational experience that students have become accustomed to at Stillman College while maintaining social distancing guidelines was immense. Yet, the college leadership began meeting daily to plan, organize and implement a response that would do just that. With a majority of faculty members already well versed in the use of online instructional technology, the transition of instructional modes was outlined and engaged. 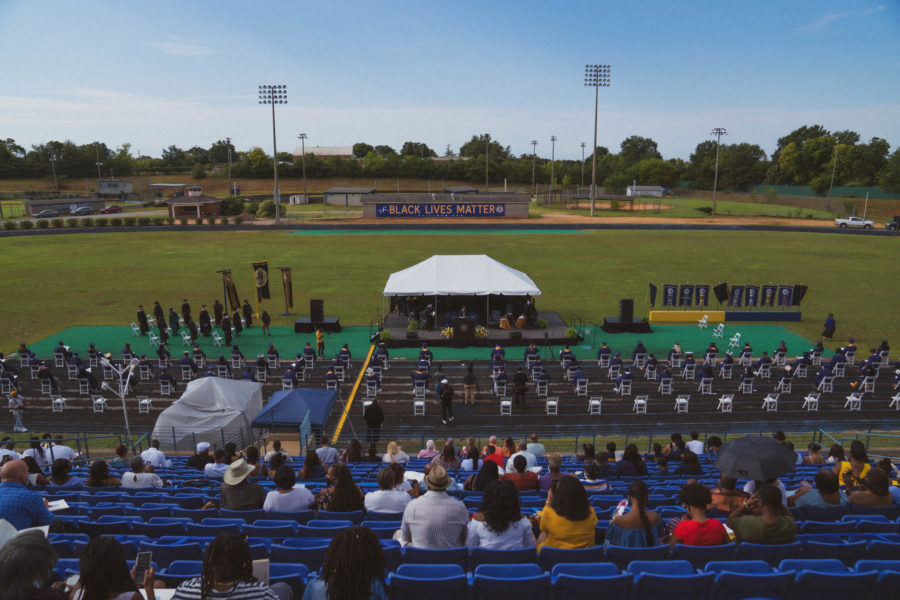 Planning, however, turned out to be the easy part. Whether moving students from campus and back home or preparing them for the technology changes needed, the disruptions of the pandemic created additional challenges for first generation students with limited resources. Many Stillman students went home to sparse Wi-Fi availability and the barriers created when families have to share data plans or computers. It quickly became clear that students would need more time to complete their work. The leadership adjusted policies to provide students and faculty with more flexibility to respond to these new challenges.

Stillman College leaders recognized that the usual model for commencement on Sheppard Lawn could not be managed with the standard arrangement of seats before the ornate columns of the William Sheppard Library at the center of the historic campus. While other schools canceled their commencement ceremonies, the decision was quickly made to move the 2020 commencement at Stillman College to the beginning of the fall 2020 term in September. That gave the Campus COVID-19 Response Team time to incorporate the logistical planning for commencement into the Return to Campus plan for the fall 2020 semester.

While the delay provided the team time to organize, it also provided the opportunity for another life-changing event to heighten their awareness of the importance of this moment in American life, particularly for Black Americans. The Johns Hopkins report announcing the disproportionate impact of COVID-19 on Black Americans in April was followed rapidly by news of the death of George Floyd at the hands of police officers in Minneapolis in May. This tragic act of dispassionate violence, videoed and shared so that everyone could witness the callous disregard for human life, reverberated with echoes of the previous deaths of Ahmaud Arbery in Brunswick, Georgia, in February, and Breonna Taylor in Louisville, Kentucky, in March.

One can consider the medical or economic reasons the dispassionate virus could wreak such havoc in the Black community. Likewise, one can explain the social, educational and economic reasons that law enforcement and the judicial system in America remain so disproportionally deadly to Black Americans. What is clear, however, is that by late spring and early summer, Americans were again filling the streets expressing their concern for the imbalances of American society in protests led by the recurring cry that Black lives matter. Clearly, Stillman College could not ignore this moment in American history. As an institution founded on the call of God to a Presbyterian minister in post-Reconstruction Alabama that Black lives matter and education is a clear pathway to opportunity and advancement, the Stillman leadership team knew that its planning had to take into account the mighty impact the medical and social challenges of 2020 were having upon its students. 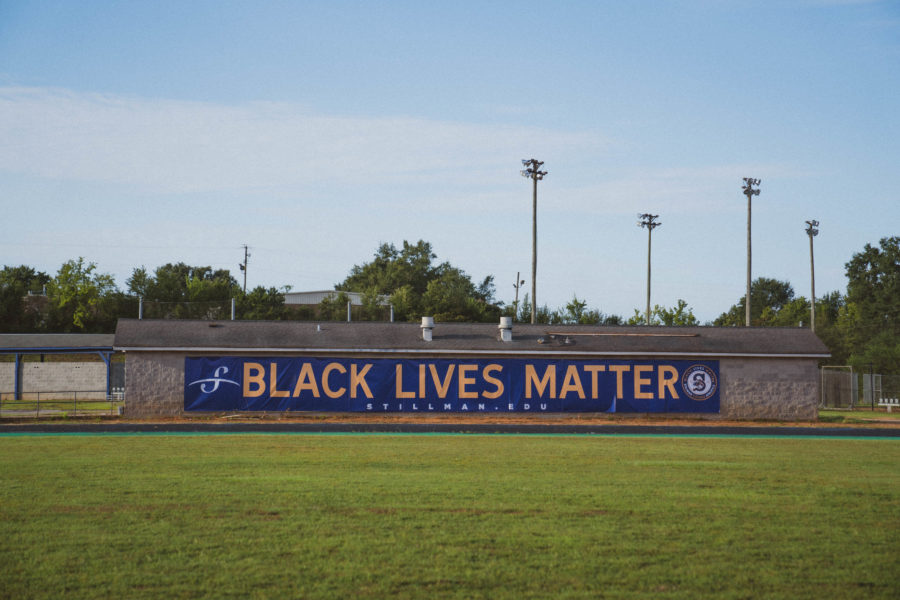 Every decision made on the campus of Stillman College is affected by the awareness that Black lives matter. Students, faculty and staff live with the lingering impact of centuries of enslaved life and the legal machinations that limited opportunity in the century after the Civil War.  Planning a commencement ceremony in the midst of the news of rising deaths of Black Americans attributed to COVID-19, the reports of Black lives lost and the rise of the street protests by Black Lives Matter caused the team at Stillman College to see their work in the light of a graduating class that is predominantly the first generation in their families to accomplish such a feat. In that way, the goal was shaped in part by the awareness of the number of candidates for graduation whose lives were being directly affected by the pandemics in this nation — one fueled by a biological virus (COVID-19) and another fueled by a social virus (racism).

Commencement at Stillman College is always a time of celebration. Extended families gather to celebrate the accomplishments of their children, grandchildren, nieces and nephews. Sheppard Lawn at graduation is full of families taking pictures, shouting out congratulations and calling out names with pride in accomplishment. Stillman College knows what these families know, the accomplishment of one member is an accomplishment for the whole family. When that one member is the first in the family to achieve a college degree or achieves that degree at the same institution where another family member did years before, it matters more. The moment matters more because it is the culmination of years of study, work, encouragement, challenge and accomplishment in the face of barriers and obstacles that persistently plague those who are breaking new social and experiential ground for themselves and for others.

Therefore, in the time of the pandemic and Black Lives Matter, commencement at Stillman College took on an added meaning. By focusing on students who were close to graduation, the summer online offerings were expanded so more students could complete their programs of study in a shorter period of time. The college decided to allow students to add courses after official registration had closed and to provide them more time to complete their work from the spring term while working on their final projects for graduation. This decision made the difference between students having to spend another year before graduation or being able to enter the next phase of their careers. The 2020 graduating class of Stillman College produced new teachers in elementary and high school classrooms, new coaches in high schools, new law students and new graduate students in social work — and changed many other Black lives through opportunity and achievement. One hundred twelve students were able to complete their programs of study and start the next phase of their lives through employment or graduate or professional school enrollment because of the additional time the college provided.

But planning the program and the logistics of maintaining social distancing meant moving the commencement ceremony from the beloved Sheppard Lawn to the football stadium where fixed seating provided the opportunity to mandate distancing. The program was organized around a ceremony of recognitions. The president recognized a retiring dean of Sheppard Library who had served for 54 years at the college and a professor who had served for 25 years and was instrumental in leading the college’s successful SACSCOC (The Southern Association of Colleges and Schools Commission on Colleges) reaffirmation for 10 years, officially notified only days before. The speaker, Mayor Randall Woodfin of Birmingham, Alabama, the youngest man to be elected to that office, was honored with an honorary doctorate of humane letters. Woodfin’s life is a story of service to others and achievement beyond expectations. His commencement address challenged the graduates to be involved in the movements of their moment and to engage in the work of making their lives and the lives of others better. This is the recipe for building a better society. All of this took place with a large Black Lives Matter banner in Stillman College school colors draping the wall across the football field from the stage.

At Stillman College, planning with focus on the mission to serve an underrepresented population delivers a difference focused on making Black lives better. It has been the mission of the college since its inception in 1876 as an institute to educate Black ministers to serve in the Presbyterian Church. It has been fulfilled through graduates like William Sheppard, who advocated for the Black lives of the Congo against European colonial abuse at the turn of the 19th to the 20th century. It has been a community of support for those accomplishing the work of desegregation in the 1950s and 1960s, like Autherine Lucy and Vivian Malone Jones when they enrolled at a predominantly white public institution in the same city as Stillman College. Stillman College’s mission is a ministry of education and service that proclaims Black lives matter every day. Whether providing broadening opportunities for education and professional advancement for its students, a place for service to the community, or a commencement ceremony in the middle of a pandemic, Stillman College continues to serve this mission. 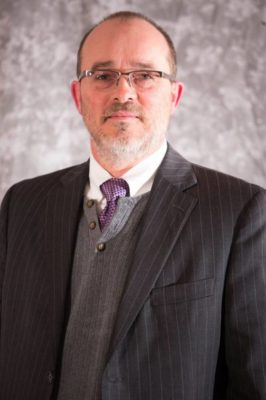 MARK McCORMICK is the provost and vice president for academic affairs at Stillman College and a member-at-large in the Presbytery of Sheppards and Lapsley in central Alabama.