“For you will always have the poor with you.” The words of Jesus recorded in Matthew 26:11 have reverberated throughout the ages. There has never been a period in recorded history that has not known poverty. No political ideology has been completely successful in responding to it, nor has any government system in any country been able to eradicate it. Moreover, poverty can strike without any warning. Even those who are wealthy can lose everything they own during times of economic recession and depression.

People who are poor live everywhere. They not only live in the inner city, but they live in suburbs and rural communities. They live in our own neighborhoods, even next door. Specifically, in 2018, 16.2% of all children (11.9 million kids) lived in poverty in the U.S. — that’s almost 1 in every 6 children.

It is believed that possibly 25 million U.S. citizens have no food for two or more days each month. Many hunger-related illnesses go unchecked. In 2015, the National Center on Family Homelessness analyzed state-level data and found that nationwide, 2.5 million children experience homelessness in a year.

Scripture indicates not only God’s command for social justice ministries and action, but also the great need for it. In the Old Testament, Israel and Judah were judged harshly by God for their injustice and oppression of the poor, the innocent, the stranger and the helpless.

The prophets who came before Jesus tried to get the message across to the Israelites and their neighbors that God abhorred social injustice.

Eventually Jesus himself declared that his coming involved the dawning of a new age of compassion and justice for the outcasts of society.

This teaching was later modeled by the first faith communities with their insistence on sharing their resources with every member of that community and beyond (Acts 4 & 6). Ironically, in the biblical witness God appears to carry out the divine designs through those despised by mainstream society — such as a group of slaves, disfranchised unemployed prophets and a murdered homeless carpenter.

Yes, unfortunately we may always have the poor and poverty with us. It’s the calling of the church, the preamble of the Family of God who welcomes all cultures and social classes, to do something about it as an agent of change in society. This, according to the biblical witness and Christian tradition, is an ethical essential for bringing about reconciliation to God and to each other by eliminating both systemic racism and systemic poverty in society, which hopefully will yield the development of a true community where economic equity can be achieved by everyone.

The Presbyterian Church (U.S.A.) has engaged in what it hopes will be a movement to bring about those needed changes. The Matthew 25 Initiative invites congregations and mid councils to adopt these goals:

By accepting the challenge of Matthew 25, our denomination may serve as an example for other faith communities to once and for all help bring about the adaptive radical changes needed for the world to eliminate poverty.

Only then can we all become full partners in ministry, honoring God, through Jesus Christ, under the guidance and power of the Holy Spirit — and perhaps prove Jesus wrong in his prediction. 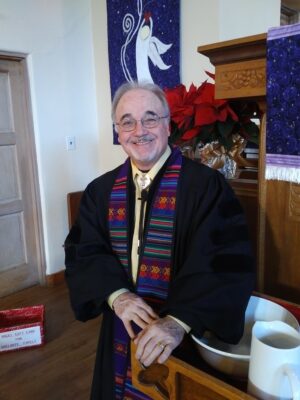 Tony Aja is an honorably retired Presbyterian minister who lives in Orlando, Florida. He is moderator of the Hispanic/Latinx National Presbyterian Caucus at adjunct professor at McCormick Theological Seminary.