So what does it mean to be a Matthew 25 church – one that lives into Jesus’ teaching from Matthew’s Gospel to feed the hungry, clothe the naked, care for the stranger, the prisoner, those in need?

How can the Presbyterian Mission Agency (PMA) – which has launched a Matthew 25 initiative for the Presbyterian Church (U.S.A.) that focuses on dismantling structural racism, ending systemic poverty and supporting congregational vitality – live into that vision?

And what needs to change in the agency’s structure and work in order to make that happen?

On Jan. 22, the Presbyterian Mission Agency Board will meet virtually — primarily to talk about those questions. In preparation for that, PMA’s president and executive director, Diane Moffett, outlined for the board’s Coordinating Committee in a Jan. 13 Zoom meeting the three-phase discernment process that PMA is using this year to come up with the answers. 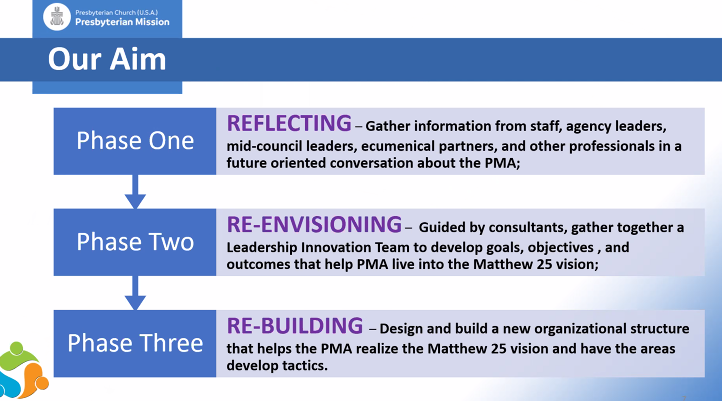 The vision implementation process began in November and is expected to conclude later this year with recommendations that will go to the Presbyterian Mission Agency Board, probably next summer, for realigning PMA’s organizational structure and staff so it better supports the Matthew 25 work.

Moffett said this process of reflection, beginning in November 2020, has involved a series of virtual retreats on the first Monday of each month, with top PMA leaders participating in Bible study and panel discussions. Conversation partners have included Liz Theoharis, a PC(USA) minister who is co-chair of the Poor People’s Campaign: A National Call for Moral Revival, and Marian R. Vasser, a diversity and equity consultant who spent more than a year as a consultant assessing power and privilege issues on the board.

Representatives from the PC(USA)’s other five agencies and ecumenical representatives also have been part of those listening sessions, Moffett said. Also part of that process: gathering feedback through “appreciative inquiry” — exploring questions about what excited people’s imaginations and what questions have emerged.

In this phase, a Leadership Innovation Team will develop measurable objectives and outcomes for living into the Matthew 25 vision. That team will be guided by a consultant — David Hooker, an associate professor of the practice of conflict transformation and peacebuilding at the Keough School of Global Affairs at the University of Notre Dame.

This phase will involve restructuring of PMA and its staff — by determining key roles for doing the Matthew 25 work; identifying people with the skills and gifts needed; and assigning personnel to “new, reimagined roles and new structure,” a slide from Moffett’s presentation stated. There’s been no conversation yet of the dollars involved or the potential impact on staff of those changes. “There will be a lot of shifting,” Moffett said.

She also told the Coordinating Committee “we’re not standing and twiddling our thumbs” while the discernment process is underway. Her presentation on Jan. 22 will include goals for the Matthew 25 program for 2021.

Board chair Warren Lesane asked for feedback from staff and board members who’ve participated in the Monday retreats.

Rhashelle Hunter, director of Racial Equity and Women’s Intercultural Ministries, said the events of this past year have pushed many to say, “I can’t sit by the sideline anymore” in the fight for social justice. While this is massive work – ending racism and eradicating poverty – the Matthew 25 initiative asks people of faith: “Can we actually make an impact in the world?” Hunter said. “I believe the Presbyterian Church (U.S.A.) is poised to do so.

And board member Kathy Maurer described the sessions so far as “an emotional roller coaster,” with emerging understandings about the church’s own role in perpetuating injustice. “Our church has been built on racism,” Maurer said. “How do you eradicate racism when that is our system?”

Lesane said that a year ago, he never could have imagined all that 2020 brought — including the deaths of what he called African American martyrs from COVID-19; the urgency of the Black Lives Matter movement; and the outcome of the 2020 presidential election.

“Little did we know that the state of Georgia” – he stood up and pumped his arm for this part of the presentation – “would turn blue, sending to D.C. its first Jewish and African American senators.”

Lesane sat back down. “Little did any of us know that the United States Capitol would be invaded, assaulted, and lives would be lost and there would be so much complicity at hand that’s being uncovered every day.”

Despite that, Lesane told the committee, “I’m still excited” because “I know that I’m not in control of this, that God’s in control of all of it. … We are already making an impact.”

Lesane also provided an update on the work of the Coordinating Table, a group of top leaders from PMA, the Office of the General Assembly and the PC(USA), A Corporation, who are working to develop a unified budget for the PC(USA) for 2023 and 2024, and who will meet for the third time Jan. 14. Among his points:

Barry Creech, PMA’s director of policy, administration and board support, has been part of a group planning the Coordinating Table’s next meeting. One of the conclusions that planning team has reached: In creating a process for developing a unified budget, “the details will come easier if we can look at some of the larger questions” first, Creech said.

So at the next two meetings, representatives from the Moving Forward Implementation Special Committee – who Creech said have “given voice to larger aspirations” for the Coordinating Table, to explore possible areas of coordination beyond just developing a unified budget – will lead the discussions.