Corey Schlosser-Hall, the new director of rebuilding and vision implementation at the Presbyterian Mission Agency (PMA), is brand new in that role – just one week into his new job.

Schlosser-Hall will play a key architectural role in designing what’s ahead as PMA begins to live into a comprehensive restructuring plan announced last fall. As part of that plan, the board will be asked to vote Feb. 11 to allocate $6.5 million from its unrestricted reserves to:

That restructuring plan calls for the Presbyterian Church (U.S.A.) to live more deeply into its commitment to be a Matthew 25 church, with a focus on dismantling structural racism, ending systemic poverty, and on congregational vitality. The board will be asked to vote later at its Feb. 9-11 Zoom meeting to approve a PMA Mission Work Plan for 2023 and 2024 that includes three intersectional priorities: gender discrimination/heteropatriarchy, militarism, and climate change.

“Our denomination we believe is ready,” Diane Moffett, PMA’s president and executive director, told the board.

On Feb. 9, Schlosser-Hall laid out for the Presbyterian Mission Agency Board his excitement about the work ahead – saying, “I’m jazzed to be with you,” and trying to give the board a sense of “how I work and what I think about.”

Schlosser-Hall, who lives in a Seattle suburb and for the last 15 years has served as executive presbyter of Northwest Coast Presbytery, said he and his wife, Adrienne, met while students at the University of Oregon, and often revisit the campus in Eugene, Oregon, while on family vacations. Eugene is known as “Track Town”—a mecca for runners – and the University’s  Hayward Field is a legendary place for runners to compete, filled with memories of pain and glory, Schlosser-Hall said.

In 2018, they tore down the stadium, to replace it with something better.

Schlosser-Hall spoke of what it felt like to “watch something that iconic, that important, get leveled and rebuilt” – something akin to what PMA is about to do.

He spoke of the Center for Repair of Historical Harms (reckoning with the past) and the Office of Innovation, Discernment and Visioning (looking to the future) as “like the right and left ventricles of the heart of trying to live the gospel of Jesus Christ.” It’s Presbyterians recognizing that “when we screw up, and we have screwed up, we can be forgiven. We can apologize. … We can make things better in God’s time and God’s way.”

And the COVID-19 pandemic has taught “we have to experiment and innovate our way into God’s future,” Schlosser-Hall said. “It has thrust us into forced innovation.” 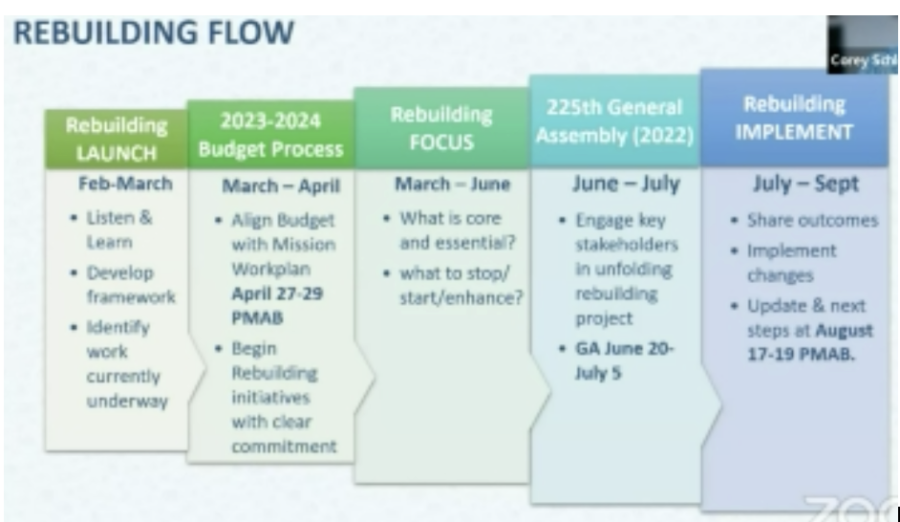 Stewardship. Another report at this meeting came from Rosemary Mitchell, PMA’s senior director of Mission Engagement and Support, who described the evolution of mission fundraising for the church since she began in that role five years ago.

Secular fundraising drives often have a “hero donor,” Mitchell said – someone who gives a big gift and makes sure the effort succeeds. A congregational campaign asks all to contribute as they are able, “with every gift making a difference. … Stewardship is not a competitive sport,” but the result of prayerful discipleship. “Our giving is our thank you to God.”

2016 brought a name change for the office she leads – from the secular “funds development” to “mission engagement and support.” And that change came with a course correction, Mitchell said – away from a focus on churches that did not financially support the PC(USA) and “constant conversation about everybody who was mad at us” to saying “thank you” to congregations that did donate.

Her office has tried to shift focus from very specific donor-designated giving – at one point, the PMA website had 1,200 giving options Presbyterians could choose from – to the idea of giving in a way that is less restricted and supports all of Presbyterian mission. Providing so many targeted options reflected a lack of trust – donors wanted control over how their money was spent – which “emerged from a fearfulness that had lasted from at least 30 years of church wars,” Mitchell said.

Numerically, the PC(USA) is a denomination in decline. 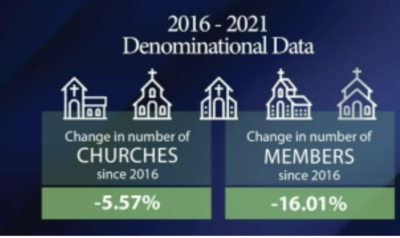 As congregational membership has declined and churches have closed, the number of faith-based and secular nonprofits that people can choose to give to has multiplied, Mitchell said.

Despite that, congregational giving to the PC(USA)’s four Special Offerings increased in 2021 -with more than $13.1 million given last year.

Leadership. The board voted to elect Michelle Hwang, a minister from Illinois, as its chair elect from 2022 to 2024 – a role she will begin following this summer’s General Assembly, when chair Warren Lesane completes his service on the board and Shannan Vance-Ocampo moves from chair-elect to chair.

Hwang said when she joined the board “I did not have this in my wildest imagination.” But she thinks the vision PMA has for its work ahead “holds so much promise for repair.”