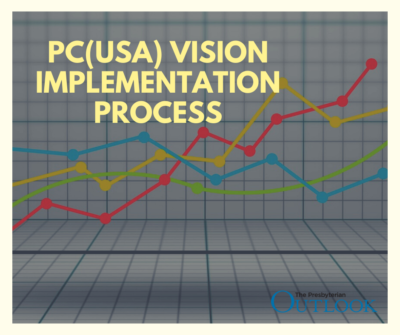 The report is presented as a way for PMA to live into its commitment of being a Matthew 25 church – with its focus on congregational vitality, dismantling systemic racism and ending systemic poverty – and to provide “a scaffolding for a vision that will guide the organization over the course of a generation,” with intentions to transform the agency’s structure, the way it allocates resources and denominational culture.

The report refers to the Matthew 25 overture that the 2016 General Assembly approved — stating that other concerns the overture raised “including addressing the climate crisis, seeking to reduce violence and demilitarize society, addressing gender justice issues, etc.” would also be ongoing concerns of PMA, and also that the agency’s commitment to transformation “should be accomplished in ways that result in anti-racist and decolonial structures, policies, and practices.”

The full board will discuss the proposed changes the consultants suggest at its Oct. 6-7 Zoom meeting. If ultimately approved, those changes could result in:

The restructuring recommendations are the result of a yearlong process of work with David Hooker, Allen Hilton and Kirby Broadnax of CounterStories Consulting — work for which the consultants were paid $215,000 over 18 months.

That Vision Implementation Process included several phases of work and study involving PMA board members, staff, global partners and Presbyterians from congregations and mid councils. Most recently, a 38-member group known as the Leadership Innovation Team or LIT has held a series of 17 in-depth conversations, starting in April and continuing through the summer, looking at how the PC(USA) can be a church that challenges the structures of inequity and stands with those on the margins.

The consultants’ report “is good medicine,” said Shannan Vance-Ocampo, chair-elect of the PMA board. “It is also honest. Some things are made bare that maybe we don’t want to talk about in public” — such as a white supremacy culture sometimes found in PMA. “The fact that harm has been done to staff of color and that trauma exists.”

In Mark’s Gospel, Jesus asks his disciples: “Who do you say that I am?”

That’s a question for the PC(USA) too, Vance-Ocampo said. Who do we say we are in a world enthralled with capitalism? A country addicted to guns and militarism, where poverty exists in a land of plenty.

“There is no magic pill for what ails us other than Jesus,” she said. “But the report is honest. It looks all these things straight in the eye, and it calls us to let go” of some things that no longer work, “lay them down for good,” find new partners and embrace reformation.

The board’s Coordinating Committee stopped short of endorsing the report – voting to thank the consultants and LIT for their work, and to ask the board to take action regarding certain elements during its Oct. 6-7 Zoom meeting. The coordinating committee is asking the full board in October to:

Moffett told the Coordinating Committee that the consultants’ report “has my imagination working overtime.”  This next phase – the rebuilding phase – will ask of PMA: “Who will we be? What will we do? How will we do it?” And then find a way to make it happen.

“I am excited, I’m challenged, I am inspired, I am humbled,” she said.

The consultants’ report says it would take time – probably 30 to 42 months – for specifics of the restructuring proposal to emerge and the changes to take place. The restructuring could include job losses for PMA staff, Moffett told an online meeting of PMA employees in July attended by about 240 staff members.

“There will be anxiety and probably resistance,” the report states.

But if bold action doesn’t take place early on, it warns, “transformation is likely to stall out.”

Possible next steps, outlined in the consultants’ report:

Sara Lisherness, who served on LIT and is director of Compassion, Peace and Justice for PMA and the acting director of World Mission, described the consultants’ report as provocative and “life-changing,” with the possibility it will “unsettle some of our colleagues. … Just continue to bathe our employees in your prayers.”

Warren Lesane, chair of the PMA board, said the consultants’ work was immersed in Scripture. “I have never in my life been part of something that’s been so generative and spiritual at the same time.”

If the board approves the approach the consultants suggest, they need to take responsibility for it, Lesane said. “If we approve this, doggone, we stand behind it. We advocate for it, we interpret it, we give it our all.” 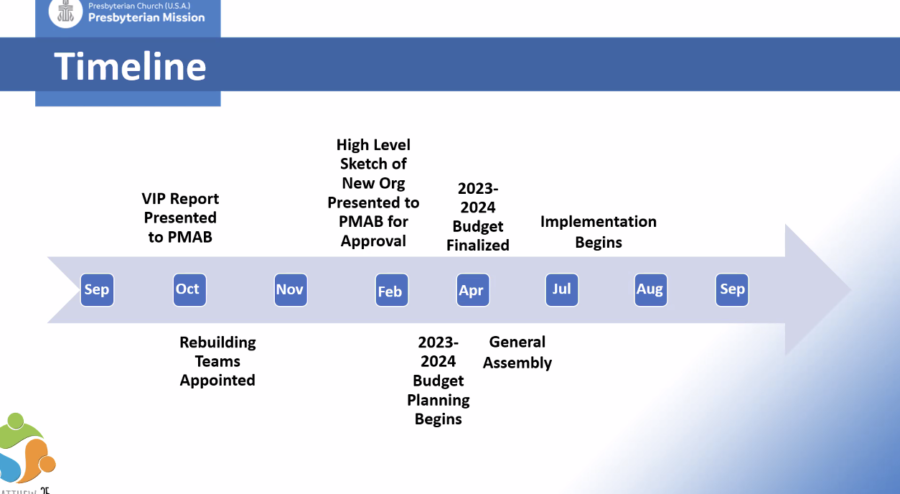 Here are some key recommendations from the consultants’ 59-page report.

Decentralization. If the board approves the recommendations, PMA would have a flattened and decentralized structure – with fewer employees working at the PC(USA) offices in in Louisville. A point of context: the PC(USA) is currently committed to a $2.4 million renovation of the first floor of that building, to accommodate committee meetings for the hybrid 2022 General Assembly.

The proposal calls for creating “locally situated action teams” or LSATs. “The team members will be conveners, listeners and co-laborers with those in the local context,” the report states — which could involve the team working with a network of congregations or mid councils, or partnering with ecumenical or local groups working on issues such as racism, poverty or climate change.

These are not necessarily long-term placements. “Convening, establishing action agendas, and connecting local congregational resources” could be work taking two to four years, the report states, although some work might take longer.

The report describes two forms of local teams, typically with three to five PMA employees each:

Some PMA functions would remain at the PC(USA) offices in Louisville. Those would include:

Expertise and relationships. The report states that PMA’s primary role will be as a convener — which requires a different set of skills for employees. Instead of focusing primarily on expertise in particular subject areas – for example, immigration or hunger – “the skill set and knowledge base of many employees will shift towards relational practices such as asset and network identification and mapping, convening and facilitating difficult conversations, network weaving, community organizing, etc.”

Funding challenges. The report states that PMA currently finances its work with funds often restricted by donors, mission networks or the Office of the General Assembly. “This system hinders the Agency’s autonomy and ability to allot resources that will carry out its vision and mission. It also prohibits the kind of fluid, relational responses imagined by LIT.”

Some changes the consultants recommend:

The report also suggests that PMA establish a set of advisory councils to listen to communities whose “full voice has not previously [been] honored” — possibly including ecumenical partners and groups involved in reparations work in the U.S.

“As a convener of sacred spaces, the Presbyterian Mission Agency nurtures disciples of Jesus and inspires, equips, and connects congregations, mid-councils, other entities of the PC(USA) and our partners locally and globally to do justice and to repair historical harms.

“The Presbyterian Mission Agency listens to, learns from, and co-labors with communities forced to the margins, and connects them to the relationships and resources needed to build congregational vitality, eradicate systemic poverty, dismantle structural racism, end militarism, and address our climate crisis.

“To do this, the Presbyterian Mission Agency provides:

Proposed list of values. The report includes a list of 10 essential values for PMA — with the hope that the list could be narrowed to 5 to 7 through work of the PMA board and employees. In alphabetical order, those 10 values are: 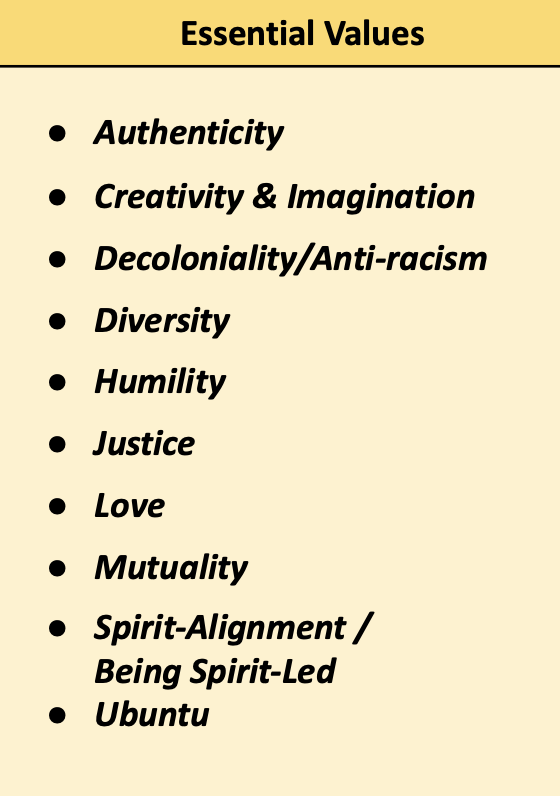 Track record and consensus.  Among the questions asked in the visioning conversations:

Also: What regional or global trends or cultural considerations need attention? Some that were lifted up globally included climate change and environmental justice; pandemics; economic strife; nationalism and authoritarianism; and the need for local and regional connectedness.

In conversations with global partners, missiologists and PMA employees working in international contexts, a theme emerged that although good work is being done, “vestiges of a colonialist mission philosophy have continued to appear in PMA ministries” — sometimes evidenced by a “white/Western savior complex.” There’s a yearning for more mutuality and collaboration.

Among the findings from discussions with employees: “Facilitators sensed and often explicitly heard a pervasive and troubling cynicism, specifically among PMA employees, based on their and their predecessors’ experience of feeling unheard. Because of past disappointments, employees often think their input will be unwelcome and go nowhere.”

PMA employees spoke of a sense of top-down hierarchy, isolation, a corporate mentality and feeling “like a cog in a machine,” as one put it.

From their perspective, what needs to go:

What should come next?

People of color spoke of the importance of listening to Indigenous voices; to considering ways in which the PC(USA) ordination process reflects white culture; and the economic disparities among congregations. “One Latinx voice bemoaned the fact that PMA and the PC(USA) are still asking and failing to answer the same questions as they were a quarter century ago,” the report states.

Working with anti-racism trainers Jessica Vazquez Torres and Shawna Bowman, the LIT group identified “white supremacist and colonial mindsets” that “should be eliminated from PMA culture,” the report states. Among them:

The LIT utilized a number of approaches for focusing its conversations — among them, envisioning what would be on display in a museum of PMA history, and drafting imaginary letters that future children who had experienced a transformed PMA might write to the LIT team about what they’d seen.

In summary, after all that conversation, the report presents this vision of PMA transformation:

“The future PMA is a decentralized agency that embodies mutual relationship, practices listening, learning, and being led by communities most impacted by injustice, and acknowledges harms it’s contributed to and makes amends for those; an organization that leverages its power and influence to change national policy and eliminate historically harmful practices, building narratives for the better. It takes a regional approach to its work, takes radical actions to address issues at their roots, is bold enough to risk everything in the name of justice, makes decisions in favor of climate resiliency, is open to the wisdom of the global community, and moves from a place of courage, love, hospitality, welcome, respect, boldness and mutuality.”

For more information, read the full report from the consultants here (CounterStories Consulting Report to PMAB September 2021). And a 118-page supplement is here (Appendix to Reflecting Reimagining & Making Space).