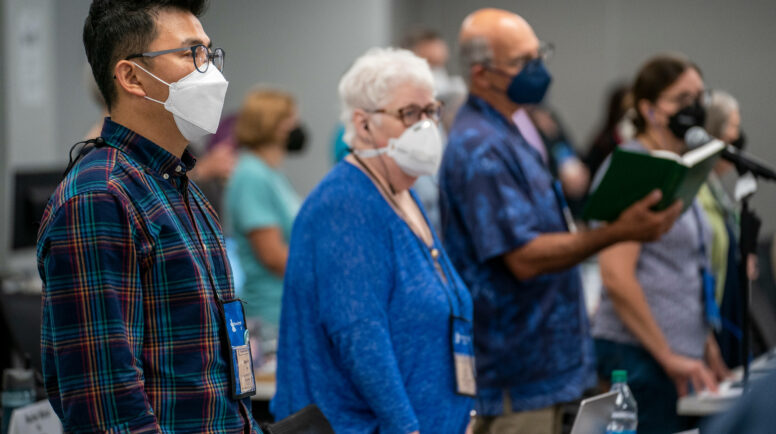 Louisville, Kentucky — The Immigration Committee of the 2022 General Assembly considered only one item of business on its first day of deliberations — voting to encourage Presbyterians with legal and interpretation expertise to get the training needed to assist immigrants trying to win asylum in the United States.

By a unanimous vote on June 27, the Immigration Committee approved an amended version of IMM-03, asking the assembly to direct the Presbyterian Mission Agency (PMA) to urge Presbyterian attorneys, translators and interpreters with skills in the necessary languages, and paralegals to be trained in asylum law, to expand the legal assistance available to asylum-seekers through existing pro-bono immigration support networks.

The resolution – a rewording of one submitted to the 2020 assembly by the Racial Equity Advocacy Committee (REAC) – also calls on PMA to establish a network of attorneys doing this work “so a list of resources exists” for those needing such services across the United States.

Lidia Serrata, a family law practitioner from Mission Presbytery in Texas, said training in asylum law is necessary because “you file the wrong form in some of these cases, and you can doom a person.”

Bisi Shofu, speaking on the resolution for REAC, said legal representation in asylum cases is vital. Many asylum seekers are being held in detention centers, and “these places are horrible,” she said. Without representation, immigrants could stay there for years, and “that is inhuman. We are a Matthew 25 church. We are supposed to care for one another.”

On their own, “they can’t hire a lawyer. They don’t have the money.”

The committee spent about two hours during its meeting hearing a presentation from three members of the Presbyterian Church (U.S.A.) involved in the denomination’s work with immigrants and refugees:

They traced General Assembly policy statements on immigration, refugees and asylum seekers going back to 1893, when the General Assembly termed the Chinese Exclusion Act – which imposed a 10-year ban on Chinese laborers immigrating to the United States – as “unworthy of this great nation and a reproach to Christian civilization.”

They described the process that refugees and those seeking asylum use to try to get permission to enter the United States, the difficulties they face, and ways in which immigration policy has often set up an “us against them” dynamic that goes against Presbyterian theological views. “We belong to God, because we are the children of God,” Waggener said. “As children of God, we are all kin.”

Some points from the presentation are likely to surface in discussion as the committee continues its work. Among them:

The process of seeking asylum. Immigrants who come to the U.S. border and request asylum, which the law allows them to do, are sometimes imprisoned in detention centers, separated from their families and children or made to wait in homeless camps across the Mexican border, “all for doing what they have to do” under U.S. law to formally request asylum, Waggener said.

“There is no guarantee for a lawyer in immigration court,” she said. “If you can’t afford one, you can’t get one. Not even if you are a child. … The government reactions to those who ask for asylum have in effect denied them due process.”

Dreamers and DACA. DACA (an executive order passed by the Obama administration in 2012 known as Deferred Action for Childhood Arrivals) and the DREAM Act (proposed Congressional legislation) are different, but both deal with the question of the legal status of young undocumented immigrants brought to the U.S. as children. At issue in the future of both programs: whether these young adults can stay in the country and be protected from deportation.

Changing views of sanctuary. An overture from the Presbytery of San Jose (IMM-06) asks the assembly to declare the PC(USA) a “Sanctuary and Accompaniment Church.”

Krehbiel said Presbyterians’ involvement with the sanctuary movement has changed since the 1980s, when immigrants fleeing death squads in Central America sought refuge in U.S. churches and help resisting unjust immigration policies. The focus often was on resisting threats of immediate deportation.

The PC(USA) was one of a coalition of religious groups that won a legal victory in the American Baptist Churches v. Thornburg case, in which 300,000 Salvadoran and Guatemalan immigrants were allowed to reapply for asylum after a settlement was reached in the court case, alleging unfair treatment for immigrants who sought asylum as they fled war and human rights violations in their home countries.

The 2010s saw immigrants seeking asylum from more countries and a jump in the number of families seeking asylum at the U.S. border, resulting in detention and family separation. Often, those detention centers are in rural areas, making it hard for lawyers to provide representation. A 2018 General Assembly statement called on the federal government “to immediately end the newly-implemented zero-tolerance policy that is tearing apart families” and for mid councils and churches “to understand, condemn and work against the ideology of white supremacy undergirding these racist immigration policies.”

Recognizing the process of seeking asylum can take years, a new sanctuary movement has emerged that emphasizes accompaniment, Krehbiel said — focused on the idea of U.S. citizens walking alongside those immigrants, by offering

So a question for this assembly, Craft said, is what can Presbyterians do to accompany, walk with, and advocate for refugees, asylum seekers and immigrants? What are the ways in which racism, xenophobia and politics feed into U.S. immigration policy?

As Waggener put it: “What do we do when some humans are valued more than others?”