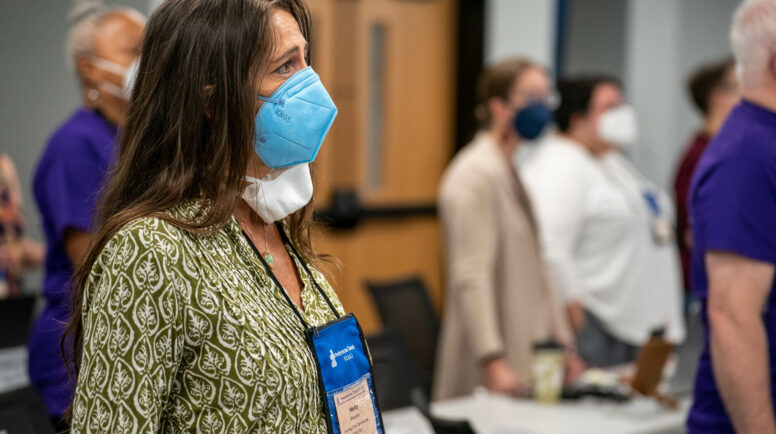 Louisville, Kentucky — The 2022 General Assembly voted 340-25 on July 5 to declare the Presbyterian Church (U.S.A.) a “sanctuary and accompaniment church” — sending a message the denomination stands with immigrants and asylum-seekers and is committed to working for justice in U.S. immigration policy.

“It matters what we say and it matters how we say it,” said Ginna Bairby, moderator of the assembly’s Immigration Committee, in introducing IMM-06, the only item of the committee’s work not to be placed on the assembly’s consent calendar.

Bairby, a minister from the Presbytery of Santa Fe, began her presentation with prayer for the 53 migrants who died after being found in the back of a sweltering, abandoned tractor-trailer in San Antonio, Texas, on June 27 and at least 23 African migrants who died June 24 – and the number may be as high as 37 – at a fence at the border between Spain and Morocco. Israel Flores Olmos, an ecumenical advisory delegate from the Spanish Evangelical Church, said those at his country’s border were African and Black, some fleeing religious persecution, and “all they want is a safer life. And all we are doing is burying them.”

Bairby prayed for those migrant deaths and those “we don’t know about. Those who didn’t make the news.”

She acknowledged the Immigration Committee’s decision to approve IMM-06 “was not without conflict,” and that the committee considered a potential amendment “to make it less declarative” and to “bring along people back home who might not be ready for this bold stance.”

But the committee and later the assembly ultimately decided to use this language: “We do hereby declare the Presbyterian Church (U.S.A.) to be a ‘Sanctuary and Accompaniment Church’ that supports and encourages its congregations, mid councils, and members to support immigrants, refugees, asylum seekers, and their children, and to resist efforts by the government to separate families.”

The language the assembly approved also states the PC(USA), through the Office of the General Assembly, stands ready to assist councils “in discerning their own calls to become “Sanctuary and Accompaniment” mid councils and congregations, to inform them of the legal risks associated with doing so, and to equip them to serve as places of welcome, refuge, accompaniment, and healing for those targeted due to their immigration status or other differences, while taking into consideration local contexts, capacity, and the results of congregational discernment.”

Immigration Committee member Kymberlaine Banks, a ruling elder from Grace Presbytery, said she was speaking as “a Black mother in a nation that was built on stolen land,” knowing her ancestors were kidnapped and brought to this country against their will and forced into enslavement. Many of today’s immigrants are “Black and brown people desperate to create better lives,” she said. “We must welcome these strangers with our love.”

Amanda Craft, manager of advocacy for the PC(USA)’s Office of Immigration Issues, said overture advocates were clear “this is about supporting the body of policy that we have” — PC(USA) policy statements over the years advocating for justice in U.S. immigration policy. While it encourages congregations and mid councils to become involved in the work, “it never says you have to provide sanctuary.”

Teresa Waggener, an immigration attorney with the Office of Immigration Issues, told the assembly “sanctuary is a big deal” — involving significant commitment and some risk on the part of a congregation, requiring a lot of discernment.

And Craft explained how the sanctuary movement now is different than it was in the 1980s. Today, it’s “often led by the immigrant community; it is much more diverse,” involving both new arrivals seeking asylum and immigrants who have lived in the U.S. for years and are at risk of deportation. The work of accompaniment is deeply contextual, she said – with U.S. citizens accompanying immigrants by offering housing and legal assistance, going with them to immigration hearings and appointments, helping them get drivers licenses and trying to get people released from detention.

Migrants, asylum seekers and refugees come from all over the world, said Cathy Chang, a mission advisory delegate from the Philippines. “Consider the faces and places of those who might not otherwise come to your imagination.”

Climate change and environmental degradation are turning some people into ecological refugees, said Will McGarvey, a minister from San Francisco Presbytery. He encouraged Presbyterians to be bold in living out this declaration.

The assembly approved all other work of the Immigration Committee as part of the consent calendar including: