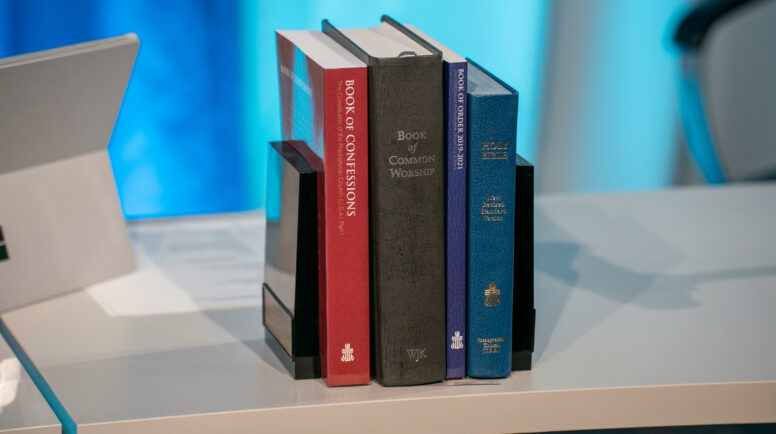 Louisville, Kentucky — Rules of the General Assembly prevent it from placing any action proposing a change to the Presbyterian Church (U.S.A.) constitution on the consent calendar. So, one by one, the assembly slogged through all 12 items of business from the Polity Committee on July 5 — giving the most discussion to items involving whether congregations can be required to implement policies on harassment and anti-racism, and on whether presbyteries should designate ministers as “honorably retired” or just “retired.”

Here’s some of what happened.

Policies. After two hours of debate and numerous proposed amendments – most of which failed – the assembly approved an amended version of POL-10, which, if approved by a majority of the presbyteries, would amend G-3.0106 of the Book of Order to require all councils of the PC(USA) “to adopt the following policies: a sexual harassment and misconduct policy, a non-sexual harassment policy, a child and youth protection policy, and an antiracism policy.”

The denomination already mandates sexual misconduct and child and youth protection policies in all councils — so the new policies to be added are on sexual harassment, harassment that isn’t sexual in nature and anti-racism.

But some commissioners argued that requiring congregations to adopt more policies without offering a template of what those policies should say could prove difficult for small congregations. One minister said he’d likely have to end up writing the policies himself. “I don’t like the General Assembly telling all the little churches ‘You shall do this,’” said John McKell, a minister from North Alabama Presbytery.

The reality: most PC(USA) congregations are small. According to the 2021 statistical report, 20% of the denomination’s congregations have from 1 to 25 members, and another 21% have 26-50 members. About two-thirds of the churches are 100 members or smaller.

Another reality: in this connectional church, templates already exist — with synods and mid councils willing to share them with congregations that ask.

In response to remarks from many commissioners, the assembly added the following comment: “The Committee on Polity recommends that an updated version of the document ‘Standards of Ethical Conduct,’ approved by the 210th General Assembly (1998), be used by the Presbyterian Mission Agency in their development and adoption of these policies. It is suggested that the Presbyterian Mission Agency create and/or provide template policies for use and adoption by councils of the church.”

The assembly also added a provision – proposed by Lori Yamauchi of San Francisco Presbytery – “that template policies be created for use and adoption by councils of the church.” It was that amendment and a pledge of denominational leaders that such templates already or soon will exist that seemed to sway the vote. The amended proposal passed 372-31.

In a related action, the assembly voted to answer POL-17 – which sought harassment policies only – with the action it took on POL-10.

Ministers’ retirement.  Strong feelings surfaced when the assembly debated POL-07, a proposed constitutional amendment to state that a minister at retirement would be considered a member of the presbytery who was “retired,” instead of the current designation of “honorably retired.”

Some ministers viewed the proposed change as disrespectful.

“For 35 years, I’ve been looking forward to the designation of honorably retired instead of just retired,” said Bob Kelley, a minister from the Presbytery of Nevada. “It’s kind of a badge, really. To take honorably out means we’re just discarded.”

Others disagreed — saying that what matters is the privilege of serving in ministry, not a title. “I feel like I’ve been honored the whole time,” said John White, a minister from Transylvania Presbytery.

Another issue: some ministers want the designation “honorably retired” even if they’ve been accused of wrongdoing. Judy Woods, from the Advisory Committee on the Constitution, spoke of a General Assembly Permanent Judicial Commission case in which a minister accused of sexual misconduct was designated honorably retired. “It can happen,” she said. “It’s an awkward situation.”

The assembly voted down a proposed amendment that would have given presbyteries a choice — when a minister retired, they could choose either the designation retired or honorably retired. What would the standards be for making those distinctions, asked Ruling Elder Chuck Olson of the Presbytery of Arkansas? “It could be political” and cause division in presbyteries and congregations, said Michelle Brekke, a ruling elder from the Presbytery of San Fernando. Or lead to “two tiers of retirees,” suggested Evan Hansen, a minister from Geneva Presbytery.

Ultimately, the assembly voted 270-128 in favor of the proposed constitutional amendment dropping the term “honorable.” It would not apply retroactively.

Eyde Mabanglo, a minister from Seattle Presbytery, argued that the word “honorably” is not essential, and “just feels like empire language. It doesn’t feel like the church.”

Ruling elders.  By a vote of 291-104, the assembly upheld the committee’s recommendation that it disapproves POL-08 — a proposed constitutional amendment to allow a ruling elder to serve at higher levels of the church, such as the presbytery, without first serving on the session. The vote on this was close in the Polity Committee — 16 to 15 for disapproval.

Those who favored the proposed amendment argued it would open the door for some to serve the presbytery who can’t be elected to a session in some congregations, such as family members of the pastor.

“People are stretched pretty thin” between work and family life, so it’s hard for them to serve both as a ruling elder in the congregation and on presbytery committees, said Christy Gleason, a ruling elder from New Castle Presbytery. “Meet people where they are today and meet the call they feel from God.”

Inclusive language. The assembly approved POL-16, a proposed constitutional amendment to widen the use of inclusive language by changing “men, women and children” to “all people” and added “abilities” and “genders” to the list of categories to which inclusive language applies. The action also requires that “disability” be included in future lists of marginalized people in the PC(USA)’s policy, procedure, and liturgy. That proposal passed 381-13.

Immigrant pastors. The assembly voted 371-23 to approve a proposed amendment (POL-15)  that would grant presbyteries greater leeway in receiving immigrant pastors as members of presbytery. Addressing concerns about the preparation for the ministry of immigrant pastors, the assembly included a provision saying, “If at the time of enrollment that minister lacks the educational history required of candidates, the presbytery should provide such educational opportunities as seem necessary and prudent for that minister’s successful ministry in the presbytery.”

Ruling elders becoming ministers. The assembly voted 369-17 to disapprove, with comment, a proposed amendment (POL-04) that would have provided a pathway for a commissioned ruling elder who had served for six years to become a minister of Word and Sacrament. The comment states that a proposed task force on the theology and practice of ordination to ordered ministry for ruling elders – an action proposed in MC-10 – could provide a venue for discussing this issue.