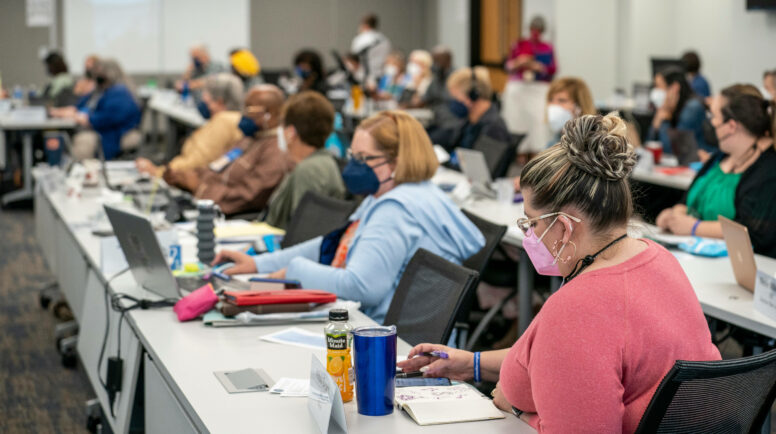 Louisville, Kentucky – The General Assembly voted 266-116 on July 8 to approve one of the most controversial items before it — declaring that the Presbyterian Church (U.S.A.) recognizes that the laws, policies and practices of the government of Israel regarding the Palestinian people “fulfill the international legal definition of apartheid.”

The assembly also voted down a proposed amendment to INT-02 that would have added language to say that Presbyterians in the United States view the Israeli-Palestinian conflict “from our own particular point in a history rife with racist acts, our own social and legal expressions of apartheid, and our own contemporary struggles with life-destroying inequities resulting from systemic racism …”

The declaration equating the actions of the Israeli government to apartheid is certain to infuriate some Jewish groups that have accused the PC(USA) of ongoing antisemitism, particularly after J. Herbert Nelson, the PC(USA)’s stated clerk, issued a statement on Martin Luther King Jr. Day 2022 calling the continued Israeli occupation of Palestinian territories “21st-century slavery.”

That sparked months of criticism — including from some Presbyterians, who said the statement hurt interfaith work in their own communities. Other groups, such as the Israel/Palestine Mission Network, supported Nelson’s statement and the passage of INT-02 in conjunction with past moderators of the General assembly.

On June 28, Pathways, a coalition of pro-Israel groups from mainline churches, protested in front of the Presbyterian Center – where General Assembly committees were then meeting – inflating a hot-air balloon in front of the center displaying the message: “PCUSA: Fight Racism. Not Jews.”

Rabbi Eugene Korn, the former academic director at the Center for Jewish-Christian Understanding, issued a statement to General Assembly commissioners July 6 saying the resolution “refers to Israeli policy in racial terms” and calling on the church to take “constructive steps” to assist Palestinians, while not denouncing Israeli government actions or policies, and to also consider the plight of Palestinians living in Lebanon, Syria and Jordan.

In introducing INT-02 for the assembly’s consideration, Peter Crouch, a minister from Mission Presbytery and moderator of the assembly’s International Engagement Committee, said the committee amended the resolution to speak of “the government of Israel,” rather than just saying “Israel.”

That was done “so the first sentence would focus on the government of Israel and its actions towards the Palestinians living in their control,” Crouch said. “It doesn’t criticize the Jewish religion and all who practice it.”

And it says this occurs in Israel/Palestine in part through laws that give preferential treatment to Jews and oppressive treatment to Palestinians; that take Palestinian land and water for Jewish-only settlements; and which deny Palestinians the right to a nationality.

Crouch said the resolution is consistent with an action the assembly took earlier this week: affirming ECU-06, a study document denouncing antisemitism and Islamophobia. According to that declaration, it’s not antisemitic to support the Palestinians’ demand for justice and efforts to seek their full human rights.

That study document affirms Israel’s right to exist, while also advocating for self-determination and safety for the Palestinian people. “We can do both,” Crouch said.

Why use the word “apartheid” — taken from the racial struggles in South Africa?

Douglas Dicks, a PC(USA) mission co-worker who has served in the Middle East for 23 years, said apartheid is viewed as a crime against humanity, and Human Rights Watch has declared that Israeli policy in the Palestinian territories constitutes crimes against humanity and amounts to apartheid.

During a relatively brief period of debate, Peter Martin, a minister from Philadelphia Presbytery, spoke against approval, saying: “This statement is not it. … Vote it down, and we can come back in two years” with something better.

Nicole Wilkinson, a minister from the Presbytery of Southern New Jersey, introduced the proposed amendment adding the context of the U.S. history of racism.

That proposal drew support from Rob Erickson, a minister from National Capital Presbytery. “The problem I have with this overture is that it is arrogant,” he said. Erickson said he has traveled to Israel with a group of Christians, Jews and Muslims, and discovered in Israel “they are doing what we did years ago with the Native Americans. It is wrong, but we have to walk with them and acknowledge our own complicity. … At least it acknowledges we are not speaking from above, but alongside” in criticizing the Israeli government.

Others spoke against adding that language — wanting the language of the resolution to speak for itself.

“We need to call things as they are,” said David Thornton, a minister from Chicago Presbytery. “We need to consider this travesty among our Palestinian brother and sisters. This thing speaks for itself.”

Cindy Corell, a mission co-worker advisory delegate, served on the International Engagement Committee and told the commissioners: “I wish you could have been there to feel the spirit moving” in those deliberations. She asked the PC(USA) to “be there as God’s heart and hands and feet,” to follow Jesus’ admonition to “love your neighbor. Let’s name the harm and let’s name the pain.”

In other action related to the International Engagement Committee, the assembly voted unanimously to approve INT-15, advocating for a peace treaty in the Korean Peninsula.

Presbyterians have worked for more than a century in the Korea peninsula, said In Yang, a minister from Riverside Presbytery. There has been division between the North and the South in Korea for 70 years, Yang said.

“Today, the pressure for confrontation is increasing,” which could lead to “unimaginable catastrophe,” possibly nuclear war. The assembly used that action to answer INT-12, affirming the need for a Korean peace treaty.

The assembly also voted 374-1 to approve INT-19, a commissioners’ resolution condemning the Russian military invasion of Ukraine and crimes against humanity, and calling for a cease-fire and the immediate resumption of internationally mediated negotiations.