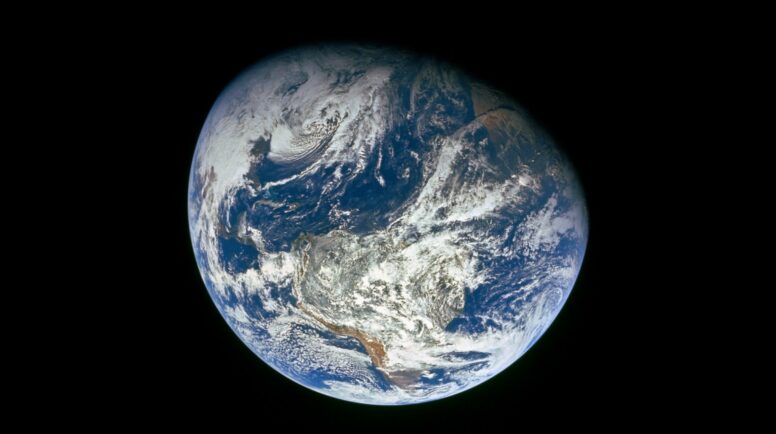 The first-ever image taken by humans of the whole Earth. Photographed by the crew of Apollo 8, the photo shows the Earth from a distance of about 30,000 km.

For Presbyterians concerned about climate change – and that should be pretty much everyone – the 2022 General Assembly set the stage for work environmental advocates are hoping to focus on in the months ahead.

For the planet, the stakes couldn’t be more urgent. Even since the assembly adjourned in July, the world has seen devastating flooding in Pakistan, killing at least 1,500 people and displacing more than 33 million; whole communities submerged in eastern Kentucky; historic rainfall that flooded the Pearl River in Mississippi, knocking out a pump at a water treatment center in Jackson and leaving 150,000 people without safe drinking water for weeks. Hurricane Fiona pummeled Puerto Rico and the Dominican Republic.

The plenaries of the 2024 General Assembly will be held in Salt Lake City, where the Great Salt Lake has already shrunk by two-thirds — a trajectory that, if it continues, could create an environmental crisis, turning the air in the city poisonous. So there is urgent environmental work to be done — both at the national policy level and for congregations and individuals.

Janette Plunkett, a sustainability manager at Seattle Pacific University and an elder at Bethany Presbyterian Church in Seattle, served as overture advocate for ENV-09 – an overture “in support of an energy transition.” In a conversation with Outlook national reporter Leslie Scanlon, Plunkett discussed some of the new directions in the church’s position on climate change, and emphases in the work ahead.

Paris Agreement. For Plunkett, one key goal achieved in 2022 was to get the assembly to continue to affirm the Presbyterian Church (U.S.A.)’s support of the Paris Agreement, with its commitment to work to limit global warming to well below 2 degrees Celsius, preferably no more than 1.5 degrees. The assembly’s endorsement of that agreement puts the PC(USA) in alignment with climate justice coalitions around the world working to slow the rate of climate change. 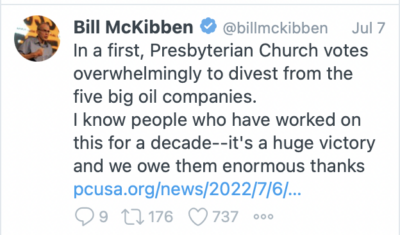 New engagement. In one of the most closely-watched actions involving climate change, the assembly directed the PC(USA) to divest from five oil and gas companies it determined had not done enough try to slow global warming — Chevron, ExxonMobil, Marathon Petroleum, Phillips 66, and Valero Energy. This assembly also reaffirmed the denomination’s strategy of first using targeted corporate engagement to bring pressure for change, followed by selective divestment from companies that don’t make quick enough progress.

But there were some new directions in the corporate engagement realm as well.

The assembly instructed the PC(USA) to reach out to the top 50 historic emitters to query them about their emissions contributions to global warming and their intent to align with the Paris Agreement. The assembly instructed the Mission Responsibility Through Investment (MRTI) Committee to contact these companies, asking them “to reflect on and acknowledge their emission contributions to global warming” and their plans for aligning with the Paris Agreement’s goal of reducing greenhouse gas emissions by 45% by 2030. The plan: ask for a reply from the companies within 6 months, and publicly post both responses received and any record of those who did not respond.

The assembly also has asked MRTI to “ratchet up their screening criteria” — the metrics that MRTI uses to measure whether companies are making progress “so they integrate with the Paris Agreement.” For example, consider requiring that the goals in the blue and green categories of the metrics, which measure companies making acceptable progress in reducing emissions, “align with a 45% reduction by 2030.”

The assembly also directed the Advisory Committee on Social Witness Policy to study the impacts of lithium mining and other types of mining activities, particularly as it affects Indigenous lands and communities in South America and the western United States, and to report back to the assembly in 2024

Fossil fuel employment. The assembly’s action tries not to stigmatize Presbyterians who work for fossil fuel companies or who live in areas where those jobs are key to the region’s economy. The action affirms that “working in the fossil fuel industry is a necessity for many” and states that “divestment is not a condemnation or judgment of their choice of employment.”

At the 2016 and 2018 assemblies, those pushing for fossil fuel divestment heard “from people in presbyteries with a large portion of their members working in the fossil fuel industry that this felt almost like an attack on them,” Plunkett said. “My hope all along was that the fossil fuel industry would find opportunities to be partners in this energy transition” — recognizing possibilities for creating more jobs by investing in renewable energy.

Presbyterian buildings. The assembly directed PMA to come up with a plan to survey the carbon footprint of PC(USA) buildings in 2023, and to repeat that survey of energy usage in 2027, in an attempt to reduce the energy usage of PC(USA) buildings by 25% over four years. And congregations, mid councils and PC(USA) agencies are urged to work towards a goal of 100% renewable energy by 2030.

Plunkett said the Green Team at her congregation, Bethany Presbyterian, goes back to 2004.  Her husband, Mark, is a marine biologist who has studied the impact of global warming on ocean acidification, so “in our household, this was a common topic.” For years, Philip Mote, a climate scientist who now is vice provost and dean of the graduate school Sciences at Oregon State University, also was a member of Bethany, and together they and others worked to educate the congregation about climate change and to push the PC(USA) to do more.

As she learned about climate change, “I began to see this as a moral issue,” Plunkett said. “The church should have a voice in it. … One of the things that really made me feel I want the church to work on this issue is we always have hope. We always believe God has the last word. Yes, we are going to reap the consequences of our actions. But somehow there’s justice and grace that gets mixed in there.’

She’s also seen that “because the federal government for so long was gridlocked around this issue, states and cities took it upon themselves to act. It was self-preservation and resilience as well. Here in the Northwest, we are having wildfires four times as often, four times as big, and four times as costly. This year, we got a reprieve, which is fantastic. That kind of damage – state and local governments have to address it” – it’s a collective responsibility.

“I don’t think it’s fair to ask individuals to say how we’re going to solve this. I do think it’s a good idea to become part of a group that’s working on it. … Find where you have some influence, and start working on some issues. “

Here are some resources on environmental activism that Plunkett finds helpful.

Blessed Unrest: How the Largest Social Movement in History is Restoring Grace, Justice and Beauty to the World, by Paul Hawken.

Project Drawdown – a resource for information about climate solutions.

Regeneration – an online what-to-do manual for responding to the climate crisis.

A TED Talk with Katharine Hayhoe – “The most important thing you can do to fight climate change: Talk about it.”

A collection of creation care sermons from Earth Ministry.