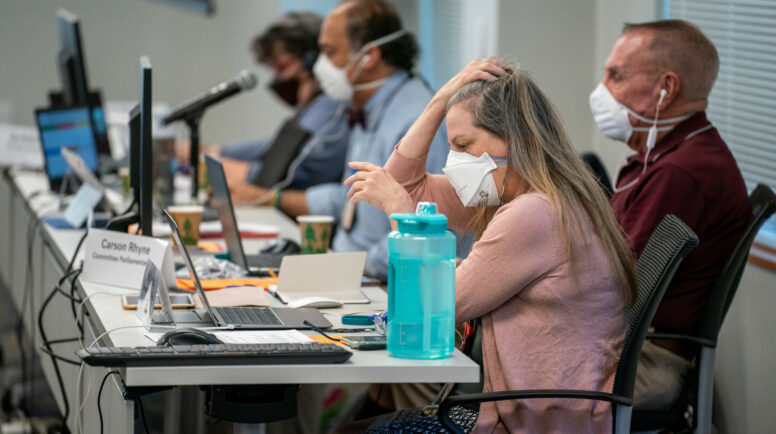 The moderators table in the Financial Resources Committee. Photo by Gregg Brekke for Presbyterian Outlook.

What are some learnings from the 2022 General Assembly?

The Committee on the Office of the General Assembly (COGA) spent time during its July 21 meeting debriefing the three-week hybrid assembly, which concluded July 9. Here are some of the takeaways.

Intensity. The extended hybrid format – with a staggered set of committee meetings in-person in Louisville, followed by five days of online plenary sessions – was “intense and exhausting,” particularly for Presbyterian Church (U.S.A.) staff members and volunteers, said COGA member Blythe Denham Kieffer. The format for the 2024 General Assembly will be different – with online committee meetings and in-person plenary sessions in Salt Lake City. But commissioners did raise concerns about the amount of time they’re being expected to commit to an assembly – and that will remain a concern again in 2024, said COGA member Dave Davis.

Reactions. PC(USA) leaders already are hearing feedback to actions the assembly took – particularly a decision to declare that the actions and policies of the Israeli government towards the Palestinian people “fulfill the international legal definition of apartheid.” Also generating some attention: a decision to direct the PC(USA) to divest from five fossil fuel companies.

Starting a few months from now, presbyteries will be asked to vote on proposed changes to the PC(USA) constitution, some of which are also likely to generate debate, such as requiring 12 weeks of family leave as part of a minister’s terms of call, and stating that a minister at retirement would be considered a member of the presbytery who was “retired,” instead of the current designation of “honorably retired.”

Connection. Despite a change in format, several COGA members sensed that commissioners were able to build community – for example, around tables during the lunch breaks. “It still felt like a General Assembly,” said COGA member Sallie Watson. While some groups complained that access to commissioners was restricted, “I didn’t see the discussions any less informed or any less rich,” said COGA member Stephanie Anthony – saying that committee members were able to focus on their work “without feeling lobbied” in the hallways so intensely. “I remember someone saying, ‘It feels more like church.’”

Questions. Most of the commissioners who reached out to the Help Desk were either seeking logistical help (such as when a flight got canceled or they needed to extend a hotel booking) or asking for parliamentary help (“How do I make this motion?” or “Why didn’t I get recognized to speak?”) “Our help desk parliamentary people were amazing,” said COGA member Robin Pugh.

Regulars. Some commissioners came to the microphone over and over. “Maybe the online format made that even easier” in plenary, Pugh said.

“The over-speakers were all teaching elder White men,” Davis said. And Andy James, who was monitoring the speaker recognition queue along with the General Assembly Committee on Representation, said “the dominant-culture voices were the first to seek recognition. They were ready.” Slower to enter the queue were people of color and Young Adult Advisory Delegates. When they did, they were moved ahead in the queue – but sometimes by then, the co-moderators had decided it was time to stop debate and move ahead towards a vote, James said.

Revisiting debate. Often, proposed amendments that took up time in plenary were repeating discussions had taken place in committee, with the same voices being heard, James said. “People who lost the vote in committee were thinking they could convince plenary otherwise,” he said. That took time, and “added unnecessarily perhaps to a sense of contention,” when in fact the assembly had relatively few close votes. “This was a relatively united body,” James said, but people “got caught up in the details.”

Equity primes. The experience of using equity primes – moments when the body is asked to pause and consider voices that may not have been heard and whether additional information is needed to make an inclusive decision – was mixed. Some committee leaders employed them creatively and effectively, others “had no clue,” said Eliana Maxim, COGA’s new moderator. Primes were used more in committee work than in plenary. When used well, “it was incredibly effective,” she said.

COGA also thanked Julia Henderson, who served as interim director of operations for the 2022 and 2020 assemblies, for her dedication over the last four years. Henderson, a ruling elder who lives in Colorado, is winding up her service – and she praised COGA, the assembly production team and the Office of the General Assembly staff, saying “it has been a delight to partner with you all.”

“Julia has been an extraordinary leader,” Maxim said. She thanked Henderson for “your grace, Julia, and your willingness to always say, ‘How can we make this work? How can we find a way forward?’”

Watson put it this way: “Neither of the past two General Assemblies would have happened without Julia.”