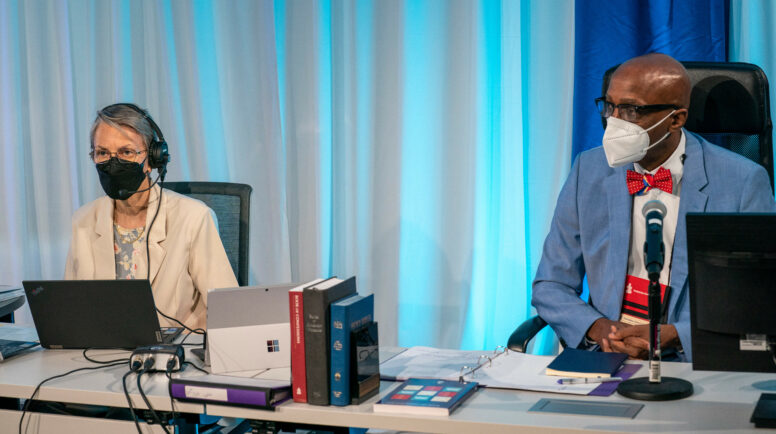 Louisville, Kentucky — After two weeks of in-person committee meetings and a short break for the Fourth of July holiday, the 225th General Assembly of the Presbyterian Church (U.S.A.) has reconvened with more than 400 commissioners and approximately 120 advisory delegates gathered online via Zoom. The split and hybrid meeting is a first for the denomination’s biennial gathering.

In the assembly’s first action following opening worship, it approved a large consent agenda of 121 items, removing six of the original 127 items for further consideration. The assembly also recognized the contributions of several theological educators and affirmed covenant relationships with Auburn Seminary and San Francisco Theological Seminary. More details on Plenary 4 are available in this article by Eric Lederman.

Plenary 5 considered recommendations from two committees: Mid Councils and Polity. An overture to memorialize non-teaching elders in the assembly’s necrology was referred to the Committee on the General Assembly and further discussion was recommended on the process of authorizing ruling elders for ministry — including within new worshiping communities and immigrant communities. More details on how the assembly voted on the recommendations brought by the Mid Councils Committee can be found in Jerry Van Marter’s article.

Discussion on the Polity Committee recommendations began in Plenary 5 and was continued into Plenary 6. The 12 items addressed amend the Book of Order and will require confirmation from presbyteries before they become official church policy. An amended POL-10, which would require churches “to adopt the following policies: a sexual harassment and misconduct policy, a non-sexual harassment policy, a child and youth protection policy, and an antiracism policy” was approved 372-31. The assembly also approved a recommendation to remove “honorably” from the title “honorably retired” for teaching elders in the PC(USA). If approved by the presbyteries, those who are currently honorably retired will remain so, while future retirees will simply be “retired.” More details on the assembly’s Polity Committee deliberations are found in our article co-authored by Leslie Scanlon and Jerry Van Marter.

The final agenda items of Tuesday’s plenary, which stretched the meeting until after 11:00 PM Eastern time, addressed recommendations from the Immigration Committee. Saying, “It’s time to be bold,” the assembly approved overture IMM-06, which declares the PC(USA) a “sanctuary and accompaniment church.” It also directed the denomination to support legal efforts at all levels of the church to assist migrants and those seeking asylum, and to oppose policies of detention and family separation. More details about the resolutions on migrant rights can be found in Leslie Scanlon’s article.

Today, Wednesday, July 6, the assembly will consider items presented by the Race and Gender Justice and Standing Rules Committees in Plenary 7 before turning its attention in Plenary 8 to the Environmental Justice and Addressing Violence in the USA Committees recommendations this afternoon and evening. Items such as divestment from five fossil fuel companies and increased attention to mitigating climate change in addition to how the PC(USA) will participate in efforts to reduce violence in society.

The final item on the schedule for today’s plenaries, number 9, is consideration of overtures from the Health, Safety, and Benefits Committee, which includes declarations on and support of reproductive justice.

Tomorrow, Thursday, July 7, the assembly will be presented with recommendations from the Rules of Discipline Committee in addition to reports from the Ecumenical and Interfaith and International Engagement Committees.

Most contentious in these last two groups is a recommendation by the International Engagement Committee saying, “Israel’s Laws, Policies, and Practices Constitute Apartheid Against the Palestinian People.”

While this overture (INT-02) was approved by the committee 28-3, it was not without controversy or protest.

Pathways, a coalition of pro-Israel groups from mainline churches, protested in front of the Presbyterian Center with a large hot-air balloon emblazoned with the words: “PCUSA: Fight Racism. Not Jews.” Todd Stavrakos with Presbyterians for Middle East Peace said during the protest, “We’re really concerned about the overture that would seek to call the State of Israel an apartheid state. One, we don’t think it’s true. And two, it’s part of a larger campaign to delegitimize the State of Israel.”

A second response from Rabbi Dr. Eugene Korn, the former academic director at the Center for Jewish-Christian Understanding, said the resolution “refers to Israeli policy in racial terms” and calls on the church to take “constructive steps” at assisting Palestinians while not denouncing Israeli government actions or policies, and to also consider the plight of Palestinians living in Lebanon, Syria and Jordan.

PC(USA) Stated Clerk J. Herbert Nelson, II has been a vocal critic of Israel’s policies concerning its Palestinian population. He drew considerable ire from factions inside and outside of the denomination for a Martin Luther King Day statement in which he compared the Israeli government’s treatment of Palestinians to American enslavement of African persons.

In a June 28, 2022, interview with Teri Ott, Presbyterian Outlook publisher and editor, Nelson said his statement was well received by many in the Black community and other justice groups, noting his reference to slavery was one with which his mostly American and Christian audience could identify. “This is the nomenclature that we know in the United States of America,” he said. “I’m not talking to people in Israel/Palestine. I’m writing this statement for the people here in the United States of America.”

Balanced against the assembly’s possible action on this item are other declarations against antisemitism and Islamophobia, promoting peace between factions in Israel and Palestine, commemorating Palestinian Nakba Remembrance Day and calling for an end to the isolation of the Gaza Strip.

Following these discussions, if the assembly holds to its currently published schedule, a presentation on the Hands and Feet initiative will close Thursday’s business. Stay tuned to the Outlook’s coverage as we follow the events of General Assembly 225. 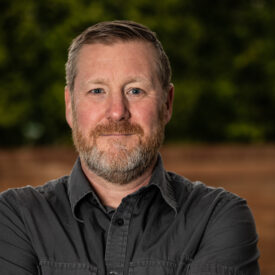